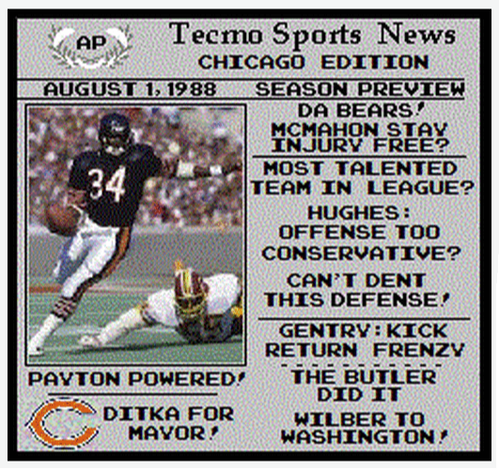 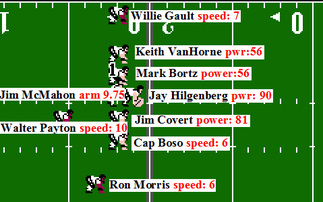 Walter Payton is the Bears offense.  With a slow WR/TE group and Jim McMahon's mediocre arm, the run game has to shine.  Payton is such a threat that the defense ignores the pass game at times, allowing the Bears to go to the air successfully.

Chicago has a two very powerful lineman with Hilgenberg and Covert.  These 2 popcorn defenders often and that leaves Payton with less obstacles to deal with.

​Chicago's playbook is a bit conservative in the passing game.  The run plays are adequate, especially with Walter Payton carrying the ball.
The pass plays typically don't net you large chunks of yardage, especially if the deep WR covered, but the dump off pass to Payton on pass 1 can be deadly. 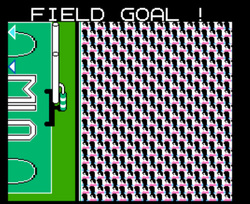 -Kevin Butler has a strong leg and can hit long field goals.
-Dennis Gentry is the best returner in the game.  He's the fastest, and that powerful Bears O-line comes into play on kickoffs as they blow open big lanes for him to run though.  Its the perfect combo for returns.
-Mike Wagner is a weak punter.  He can only kick it 61 yards. That's 10-15 shorter than the best punters.

Bears Synopsis
Chicago stands out as one of the "elite teams" in Tecmo Bowl along with the Giants/49ers.  They have a similar defensive acumen as that of the Giants.  Offensively they grind lesser opponents into pulp with a slow methodical offense.  The Bears resemble the Giants in many ways in terms of how they win games.  Kick returner Dennis Gentry is one of the more dangerous player in Tecmo Bowl.  The only knock on them is a conservative set of pass plays and slow WRs.

Listen to our detailed podcast below covering all facets of the Bears.

To see more team pages, click on the helmets below.
Eventually we will have a page up for all 12 Tecmo Bowl teams.