Teams play 2 games vs each opponent on the schedule.


The key aspect here is the random inter-division opponents which are shown inside the black boxes.  Each team has a unique schedule.


From an analysis standpoint, the winner of the random inter-divisional schedules are the Minnesota Twins in the East, because they avoid N.L. & Cal.  The San Francisco Giants in the West avoid the powerful bats of Boston & Detroit.  That should play a role in putting the Twins & Giants in a good position to reach the post season.

As for the considered losers in the scheduling process, Detroit faces both N.L. & Cal.  New York also falls into this category as they were the only West team to not face either Houston or St Louis, which are easily considered the worst teams.  Detroit should overcome that schedule considering they play in a much weaker division.

Detroit was dominant inside the division,  and only a sweep by the N.L. kept them from having the outright best record in the league.

Boston's  failures to sweep weaker teams such as the Twins, Mets, and Cardinals cost them the division title.  Minnesota flirted with the division title, but got swept late by the Tigers.  The Cardinals and Astros were never really in the hunt.  Houston did split with the N.L. & A.L, which is really a great accomplishment for them.

In the West, the Giants were in the drivers seat, but a season ending sweep by the A.L. knocked them off.  The American League's supreme division record gave them the title.  The N.L. finished red hot winning 5 of 6 to offset a slow 3-3 start.  Steve Bedrosian played a key role in the turn around.  A 3-5 start doomed the Angels.  The Mets went into the final series against the N.L. with a chance to still get in the playoffs with a sweep.  The Mets lost the opener to N.L. in a 12 inning game to knock them from playoff contention.

The Twins got out to a 1-0 lead in the 1st inning of both games, but got shut down by the Sox pitchers.  Boston won both games 3-1, as Roger Clemens, Bruce Hurst, and Bob Stanley set the tone in both games.  The RedSox pitchers surrendered the 3rd most runs allowed over the season, but their playoff performance was key in the 2 game sweep of Minnesota.

With a cornucopia of big bats on both sides, Harold Baines proved to be an unlikely hero.  Baines hit a two out single to right in the bottom of the 9th driving in the winning run in as A.L. won game 1 by a score of 5-4.

In game 2, A.L. builds a 3-0 lead through 4 innings.  Canseco adds a 2 run homer in the 8th and the A.L. clinches the series with a 5-0 win.  The A.L. pitching staff only allowed 6 runs vs the N.L.'s powerful bats in 4 games this season proving they are one of the best staffs in R.B.I. Baseball.

The N.L. was the odds on favorite to reach the series, but found themselves coming up short thanks to a determined A.L. squad.

Alan Trammell leads off in game 1 with a homer, and the Tigers build up a 3-0 lead after 3 innings.  Detroit pounds out 6 solo homers & convincingly wins 6-2.

In game 2, Boston shows signs of life with an Ellis Burks homer in the 8th to take a 2-1 lead.  In the bottom of the 8th Bob Stanley runs into some trouble facing the top of the order.  With the bases loaded, Stanley walks Kirk Gibson forcing in the tying run.  Darrel Evan adds a single, & the Tigers go up 3-2.  Eric King comes in and closes the door on the heart of the Sox order as Detroit pulls off the sweep.  Boston needed more than just their big bats in this series. 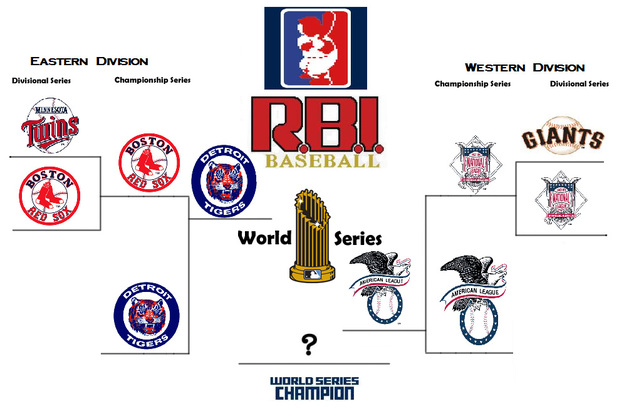 Game 1:
Both #1 seeds advanced to the World Series in this highly anticipated R.B.I. match-up.  Many in the media had expected a National League & Boston series just a few days before.  The sweeps in the championship round came as a big surprise.

In the bottom of the 3rd Cal Ripken hit a solo shot to start the scoring.  Ripken adds a 2nd homer in his next at-bat and A.L. led 3-0.  Much like Harold Baines providing the unexpected spark vs the National League in game 1, Ripken played the role of the hero this time around.  George Brett & George Bell add solo shots & the American league won game 1 by a score of 5-1.

The A.L. got a masterful performance from Jimmy Key & Tom Henke as they took the opener convincingly.
Game 2:
Don Mattingly hit a 2 run shot to start the game.  Jose Canseco follows with a solo & A.L. jumps out to a 3-0 lead in the 1st.  Mark McGwire's homer puts A.L. up 4-0 after 2 innings.  The rout is on early, but the Tigers persevere & start to chip away.   In the 8th Darrel Evans solo homer pulls Detroit to within 4-3.

A.L. only had Tom Henke left and he'd showed signs of tiring, as it appeared Detroit might comeback & win game 2.  George Bell came through with a homer for an insurance run in the bottom of the 8th, and the A.L. took a 5-3 lead to the top of the 9th.  Down to their last 3 outs...Bill Madlock led off with a home run and Detroit pulled within 1 again.  Chet Lemon drove a fly ball to the wall for an out in center.

Sparky Anderson subbed in Mike Heath but he was called out on strikes.  Tom Brookens lined a 2-out double to center, to put the tying run on base.  Unfortunately for the Tigers, they were down to their last pitcher in the game & couldn't pinch hit for Eric King.  With the game on the line King popped out to end the game and A.L. took the 2nd game in the series 5-4.
Game 3:
The series moved to Detroit as the Tigers went back home, hoping to salvage the season while being on the brink of elimination.  Tiger's ace Doyle Alexander took the hill again in a rematch of game 1 vs Jimmy Key....hoping for a different outcome this time.

Game 3 started off with the American League loading up the bases, but Alexander got out of the jam without allowing a run.  In the bottom of the 1st Bill Madlock hits one out with a runner on, but its called just foul by a mega-pixel.  The Tigers missed out on a golden opportunity, and the pressure began to mount for Mo-town in this elimination game.

The American League built a 3-0 lead in the 5th, but Detroit answered with 4 in the 6th to take the lead.  The explosion of runs for Detroit occurred with runners on base, as Trammel & Kirk Gibson got singles followed by a home run from Darrel Evans.  That was the 1st time the Tigers had a lead in the series against the American League.

However that lead was short lived.  The A.L. immediately countered as they've done all series with a 2 run Mark McGwire homer in the 7th.   Detroit was unable to get back on the score board in the last few innings & bowed out by a score of 5-4 after a great season.  A season in which the Tigers met & exceeded most expectations for them.  The American league is crowned champion of the inaugural R.B.I. Baseball season behind some clutch bats in the post season, & superb pitching all season long.  The American league pitching staff dominated the big bats of the National League in the 4 games they played, proving they had the best pitching staff in the league this season.