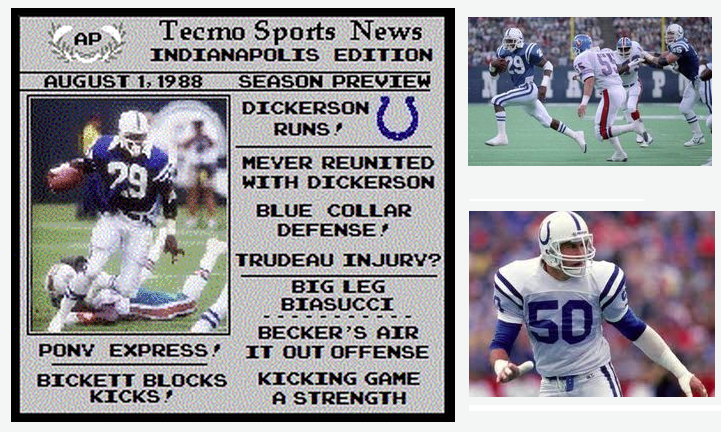 The lasting impression the Colts  left on a lot of people was that Jack Trudeau did not have a strong throwing arm, & therefore the offense struggled to move the ball.  People also recall that the team was devoid of star players.  This could not be further from the truth, as Indy boasts 4 of the best players in the game at their respective positions.

The collective ability of the Colts has helped them to climb the rankings.  Eric Dickerson is an absolute beast in the run game.  He forces defenses to key in on the run game.  The Colts playbook is easily one of the best in Tecmo Bowl.  The wide receiver routes are spread out far apart, and with a little patience, Trudeau can pick apart any defense.  The spread out routes allow for Trudeau to complete passes despite a low arm strength rating.  All in all, its a very efficient offense, & grinds down the field.

Defensively, Duane Bickett leads at line-backer.  The Colts can play solid defense, & Bickett is a big reason why.  Part of their defensive ability can be attributed to their great punter Rohn Stark.  His long punts often lead to wining the field position battle.  Indy is the classic blue collar team in Tecmo Bowl.  They're not flashy, but a very solid team often undervalued by those who play Tecmo Bowl.

Helping out with special teams is Dean Biasucci.  Biasucci has one of the strongest legs in Tecmo Bowl, & he can hit field goals from deep range.  The Colts have the best overall kicking game in Tecmo Bowl, & that's paramount to their success.  Indy has a lot of the football "intangibles" that other teams don't.  A great playbook, & top notch special teams are 2 key factors that ensure the Colts can match-up with any team out there.

Last but not least, they also feature the most powerful offensive line in the game.  Ray Donaldson, & Ron Solt popcorn defenders quite often.  Not a huge deal in Tecmo Bowl, but it always ensures that there's one less defender on the field momentarily, which helps spring Dickerson for long gains.

The best playbook in Tecmo Bowl.  The pass route design is masterful.  Pass 1 puts a target for Trudeau deep, across the middle (Dickerson), out in the flat & up top.  Not even L.T. can cover that much ground.  Pass 2 has targets at 3 different levels/depths on the field.  While the defense keys on Dickerson, Trudeau can dink & dunk his way down field. 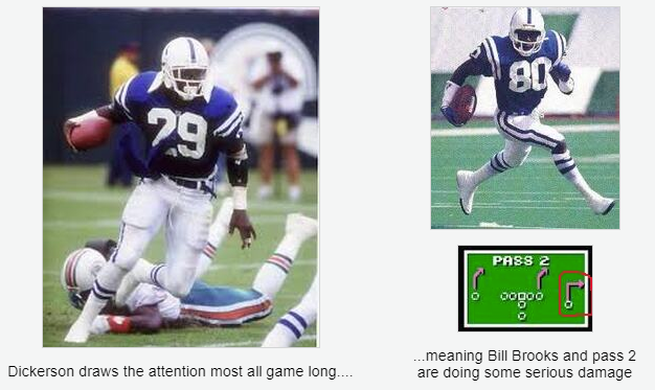 Slow wide receiver?  Yes.  Quarterback has a weak arm?  Sure does.  That's not a problem for the ever dangerous #80 Bill Brooks.  With those 2 factors working against Brooks, he finds a way to shine in the Colts offense.  Eric Dickerson gets a lot of attention from the defense, & Bill Brooks often finds himself wide open on pass 2.  Brooks repeatedly chews up 7 yard gains catching the ball on pass 2, as the Colts offense methodically moves down field and eats up clock.  Brooks is one of the most unlikely heroes in Tecmo Bowl.

That's right, another punter is on this list.  Stark is one of the best, and his booming punts flip field position as well as anyone.  The Colts have a methodical offense, & blue collar defense.  When you add in Stark pinning the opponent deep in their own territory most all game, you have a recipe for a damn good Tecmo Bowl team.  Without Stark, the Colts would easily fall a few spots in the overall ranking.  He's probably one of the top 5 most valuable players for his team in all of Tecmo Bowl.

Bickett is the 2nd best bottom outside linebacker in Tecmo Bowl, only behind Lawrence Taylor.  He's not a household name to the masses, but the guy is a big time game changer.  The Colts defense only ranks middle of the pack with a host of average guys, but Bickett single-handedly makes it a tough unit to score on.  Without Duane the Colts defense would be moribund.  With him they go toe to toe with most any offense. 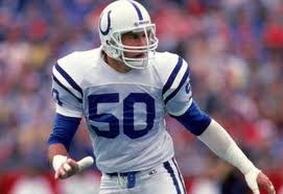