TECMO BOWL VS R.B.I. BASEBALL
Tecmo Bowl Strategy: The X's and O's of the game

The key to run defense is understanding how run blocking schemes work.  On run plays in Tecmo Bowl, 3 defensive players are not blocked!  By using these positions you can limit rushing yardage. The positions are: Defensive end (Red arrow), Outside Linebacker(Yellow arrow), Defensive Back(Blue arrow).

On a run play to the bottom half of the field, the Top D-end, Top outside LB, & Top DB are not blocked.  On a run play to the top half of the field, the Bottom D-end, Bottom Outside LB, and Bottom DB are not blocked.  When your defender gets blocked the running back has time to gain many yards.  When your defender is not blocked, its easy to tackle the running back for a short gain.

See positions below to use on defense to limit rushing yardage

There is a caveat to run defense!  Miami has a unique run play through the middle of the line.  Only the top & bottom outside Linebackers go unblocked against Miami.  The D-end & Defensive back positions will be blocked when Miami calls Run 1.

See video below on how strong side run defense works,
along with an additional run stopping tactic. 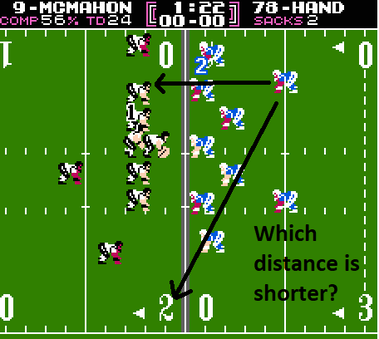 ​The field in Tecmo Bowl has a top & bottom half, like a "bunk bed".  The Bunk Bed defensive ploy involves using the defensive back.  What you do is choose the top side DB for example & call the bottom run play.  This is opposite of what was discussed above with strong side run, & this ploy ONLY WORKS with the DBs.  By doing this you stop the run play furthest away furthest away from your defender because you called it.

The primary benefit is that this combination of call & position player "short circuits" the offensive run blocking scheme.  In this scenario the DB is completely unblocked on the run play to his half of the field.  The result is an easy tackle.  The added benefit is the shorter distance that your DB has to run to make the tackle. The running back in most cases gains less yards when facing bunk bed defense.  See the illustration showing the difference in distances.

3.  How to Stop Bo Jackson and the Raiders!

The best way to combat the Raiders passing attack is to call a lot of pass 1.  In this scenario, when the Raiders offense calls Pass 2, the Bottom Outside LB will be designated to cover the bottom WR.  See the pass 2 diagram with the red box around it.  With that receiver already cover by a CPU controlled defender, the only other targets open are the Todd Christensen and Marcus Allen.  Their routes both go to the same area of the field, creating a small window to throw into.  The star in the pass 2 diagram illustrates when their routes take them and where you can sit in coverage with your defender.  Additionally by using the Top Outside LB, you're already in a good position at the snap to cover those 2 routes.  To recap, be the Top Outside LB and call Pass 1.  That't it.  That's the strategy!

Video below illustrates how to stop Bo Jackson

A crucial defensive ploy.  Based on the combination of calls between the offense and defense, beneficial pass coverage help gets administered by a CPU controlled defender.  When the defense does not call the same pass play as the offense, the game gives a reward in the form of this pass coverage help from a CPU controlled defender.  In the best scenarios, that coverage help is on a receiver running a deep route.  With virtually no chance of a pass being completed to that receiver going deep off screen, your defender can get in coverage on 2 or 3 targets running short or intermediate routes. This ploy forces the offense into short yardage gains, while the QB has to throw into some tight windows.  See illustration below. 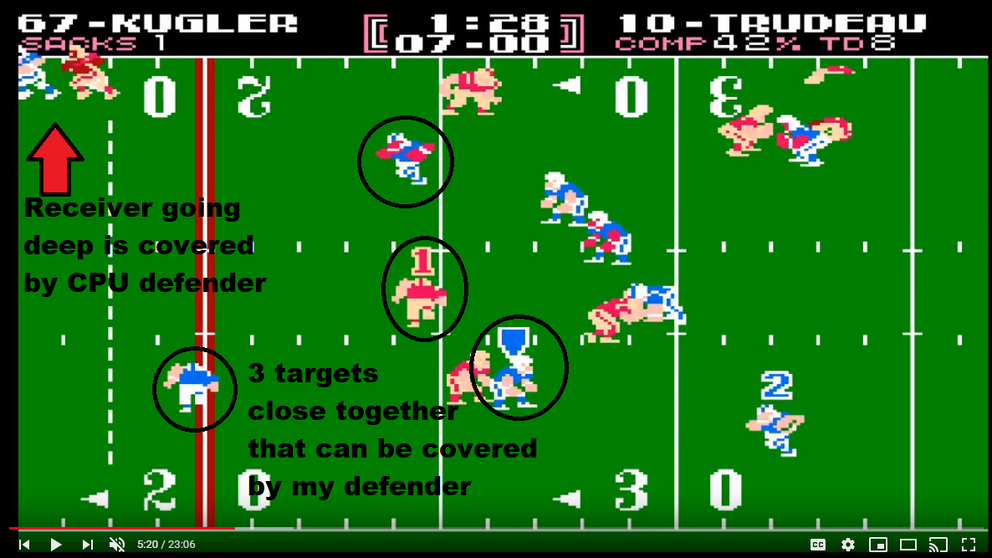 Note the receiver at the top left cover is covered by a defender, and the threat of a big passing play has been eliminated. The player controlled defender (with #1 overhead) is able to sit in an area where all 3 passing targets can be covered fairly well. This may not result in an interception but improves your chances of getting one.

I will need to put together a large document outlining all the play-call scenarios where the most beneficial coverage occurs.  Additionally there is a caveat. Typically the most beneficial CPU pass coverage is administered by the top side defensive back.  If you control that position defender, it negates the CPU coverage.  For example in the image above, the CPU designated Ronnie Lott for pass coverage. Most people want to control Lott due to his speed. In order to execute this highly effective pass defense, you need to get comfortable using different defenders.

​Additionally some Run calls by the defense result in beneficial pass play coverage.  The image below illustrates Seattle's offense in Pass 1, while the defense has made a Run 2 call.  Note the CPU pass coverage up on the top left, and the controlled defender (#1) in coverage between 2 targets that are fairly close together. 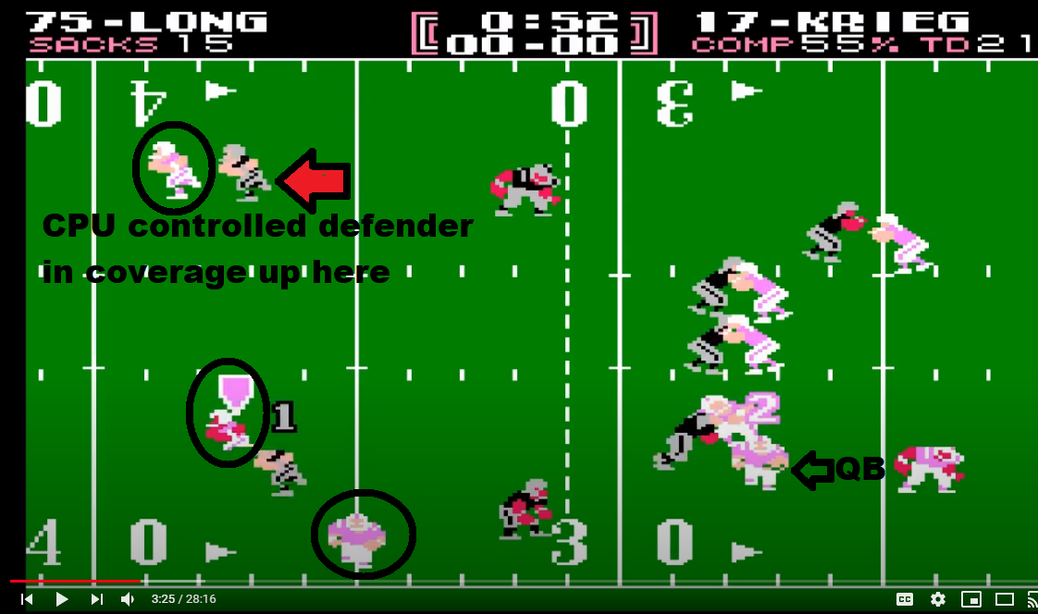 ​See video below for insight on why Carl Banks
can be just as effective as Lawrence Taylor!

​Video below illustrates multiple ways to use Chicago's defense against Dallas.
Many technical aspects of playing defense are covered.