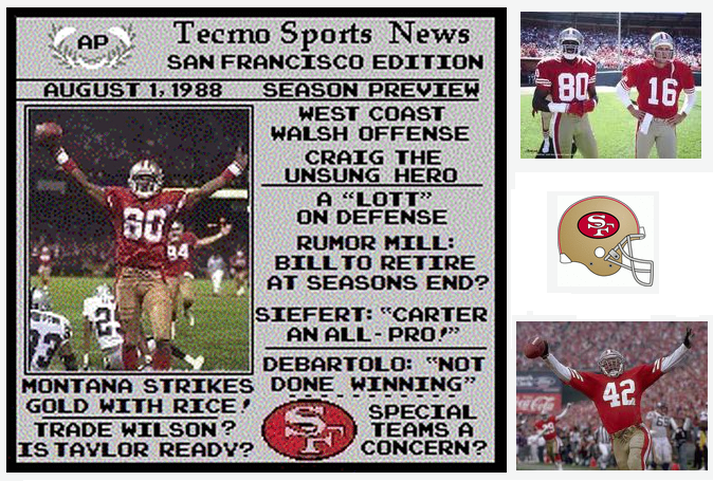 There's no shutting down Joe Montana and his targets.  All you can do is slow them down.  The 49ers best asset is their offensive ability to go toe to toe with any defense.  This is no better group of offensive talent in Tecmo Bowl.

Defensively the 49ers have a couple elite players with Ronnie Lott & Michael Carter.  Lott can single handedly shut down a lot of teams.  The only glaring weakness the team has is the lack of a stand out special teams player. 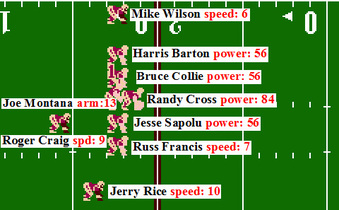 Jerry Rice's blazing speed and Joe Montana's strong arm form one of the deadliest duo's in Tecmo Bowl.  Roger Craig is quick, and in the shot-gun formation gets lined up in the bottom slot giving the 49ers another fast receiver for Joe cool.
Mike Wilson leaves a lot to be desired, but the playbook is good and he's open most of the game.

​Pretty solid all around.  Good routes and targets spread far apart.  Craig is always a great check down receiver with good speed on pass 2.  When the defense makes a bad call, theres a lot of receivers wide open with any play-call.  Quick strikes galore! 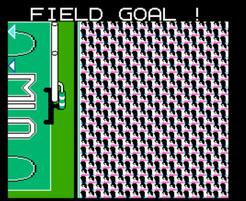 Much like the Giants, the 49ers are lacking in good special teams performers overall.
--Punter Max Runager is one of the better in Tecmo Bowl.  He tops out at 71 yards. 49ers can drive the ball.  Can their opponents?
--Ray Wersching is mediocre as far as kickers go, and just falls into the bottom half of the game.
--Crawford is slow & rarely gets big return yardage.

49ers Synopsis
San Fran has the most prolific offense in the game.  The defense also ranks just in the top half of Tecmo Bowl teams and is very serviceable.  There's really not a glaring weakness with this well rounded team.  They can consistently move the ball well enough to overcome the lack of a solid kick return game, and also the kicker's short range in terms of FG attempts.

This page is still under construction.  Check back for more 49er updates!

To see more team pages, click on the helmets below.
Eventually we will have a page up for all 12 Tecmo Bowl teams.