The strategies for RBI Baseball revolve around a numbers game covering player ratings & abilities.  To become a great RBI player, this knowledge is key for your team to perform at it's full potential, and to help you determine strength & weakness of the opposing team. 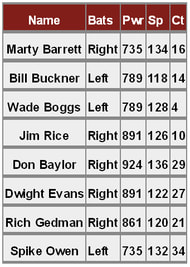 I'm not tired yet, are you???
Despite the powerful batters & small dimensions of Tengen Field, pitching rules in RBI.  The best way to offset Nolan Ryan's fastball, or Fernando Valenzuela's wicked curve ball is to wear them out with high pitch counts.  Each pitcher has a set stamina number & when he reaches that number, he wears down in a hurry.  See the pitcher ratings here.

Take pitches and work the count as much as possible.  The starters typically have a stamina rating of about 40-45 pitches.  The relievers only have about 15.  On the flip side you have to be crafty on the mound as well and conserve your pitches. Shy away from power hitters to avoid giving up home runs, and challenge the weak bats in the line-up.

Does your staff have an outstanding relief pitcher?  Get him on the mound right away!  Relievers have limited stamina of about 15 pitches before they start to lose pitching movement and speed.  Start the game with a reliever, and you raise the probability that he goes 3+ innings.  As the reliever loses ability it's ideal to face weaker 7-9 hitters without his best stuff.  The lead off batter typically doesn't have a lot of power either, helping the reliever possibly get through 1 or 2 more batters.

Take this situation for example.  A reliever comes in during the 6th inning to face the 5-7 hitters.  Next inning he faces 8, 9, and 1 hitter.  Then he faces the heart of the order as his speed and movement diminish.  Advantage to the batters.

Some teams are an exception to this strategy.  John Tudor of St. Louis is so dominant that I don't recommend using an inferior reliever to start, as you don't want to get in an early hole score wise.  While St. Louis has a lot of speed, they severely lack power, and you can't rely on a home run to get you back in the game.  John Tudor is the type of starter than can shut down any line-up for 5 to 6 innings while you put a run or two on the board.

R.B.I. Strategy #4:  Use walks to your advantage

There's definitely a couple line-ups in RBI that are too formidable to expect your pitcher to go through unscathed.  While this sounds somewhat contrary to strategy #1, it's necessary at times.  Putting a man on 1st prevents your pitcher from facing a powerful batter.  It also sets up the possibility of a ground ball double play which happens quite frequently in RBI.  The best way to put a man on base is to hit him with a pitch early in the count.

The key is to learn the players power numbers which can be found on the batting line-ups page.  Then identify a few spots in the order for each team where walking a powerful batter to face a much weaker hitter is a possibility.

R.B.I. Strategy #5: Master the nuances of the game

This sounds vague, but its absolutely critical.  Practice defense!  There are ground balls and fly balls that an inexperienced RBI baseball player won't get to, but a seasoned player will track down with ease.  Get used to how the defense works and how the players are controlled in conjunction with each other.

Practice the strong throw!  Its a combination of hitting the directional pad and the A button at the exact same time.  Your defensive player will throw the ball harder than usual.  You'll need this skill when fielding the ball deep at short stop if you want to throw out a runner.  This also helps with throws from the outfield.  Also work with the cut off man.  There's always a short stop or 2nd baseman just standing around.  You can move him towards the base for a quick catch and throw from the outfield.

Make sure you can perform a run down to throw out a base runner.  This is a key skill in competitive R.B.I. play.