Knowledge of power and speed ratings in R.B.I. Baseball makes fore educated decisions.  The player ratings below illustrate which bench players improve the line-up, or serve as a valuable late game pinch hitter.  Each bench player gains a substantial 64 point power bonus during his 1st at bat.  From a pitching stand point, the ratings help you determine the safest batters to challenge for quick outs, and batters that should be carefully pitched around in crucial situations.

Power and speed are self explanatory; the higher the better. For context, I've grouped notable power ratings below.
830-860: Average power
861-890: Substantial power
891-920: Dangerous
921 and up: Elite power
Gray areas exist with players near the top or bottom of a power designation and certainly could fit in the next group.
Players with power below 830 rarely hit home runs in competitive 2-player games.
***All Pitchers have the same batting ability;640 power, 118 speed, 64 contact***
Contact rating is in my opinion the least important attribute.  Any time a batter fails to make "solid contact" with the ball, his contact rating number is subtracted from his power.  Even with this power decrease the top hitters are still a major threat.  Contact rating has substantial affect on weak hitters as a drop in power ensures it's extremely rare they hit a home run. ​ 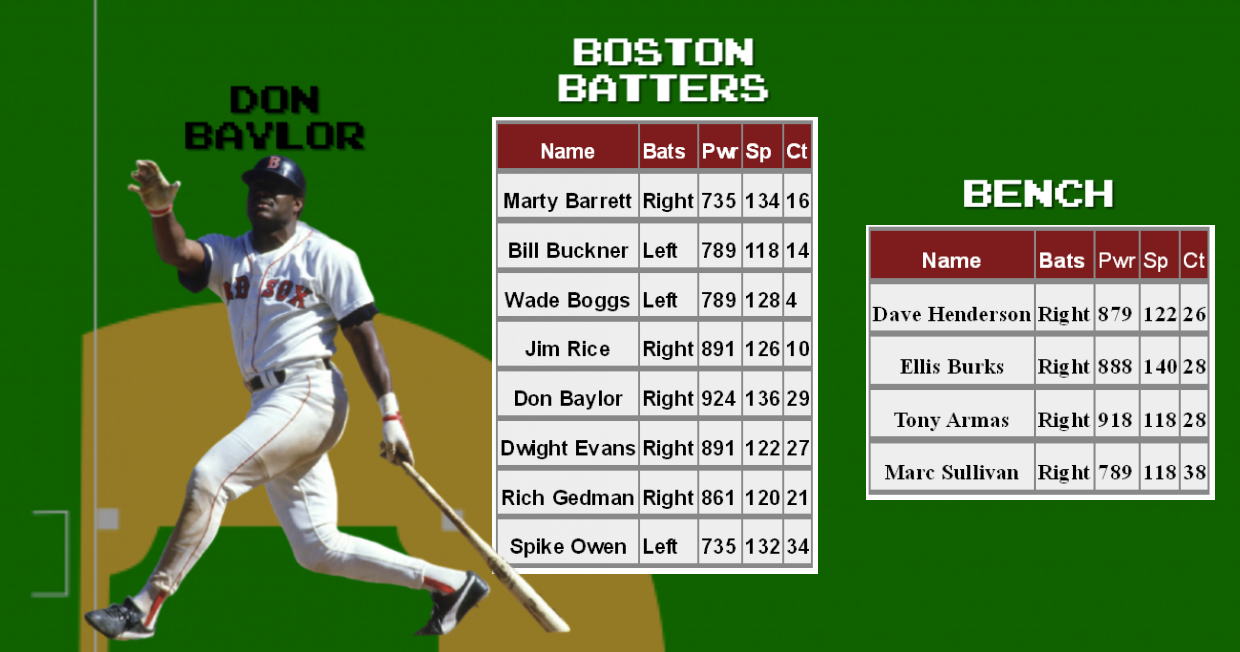 The original line-up isn't too daunting, but Boston's subs are all about power!  Get the big bats to the plate as often as possible.  Armas and Burks make a strong combo replacing Barrett and Buckner.  Burks speed is best utilized batting 2nd, as he's far less susceptible to a double play than Armas.  After working around those 2, you'll find the middle of the order is equally imposing.

Jim Rice, Don Baylor, and Dwight Evans are hard to navigate through as each possesses a homerun threat.  Even Rich Gedman batting 7th offers decent protection and prevents Evans from getting pitched around.  To make the line-up more difficult, Henderson subs in for Owen in the 8th spot.  This places a solid bat late in the order, and doesn't allow for the pitcher to coast through any part of the line-up.  Henderson often gets walked to get to the pitcher.

Overview:  Boston's power is staggering.  The lack of lefty bats is not ideal, but once the subs are in place this is a murderers row line-up.  The amount of powerful bats are key for raising pitch counts as the pitcher has to be exceedingly careful with almost every batter. 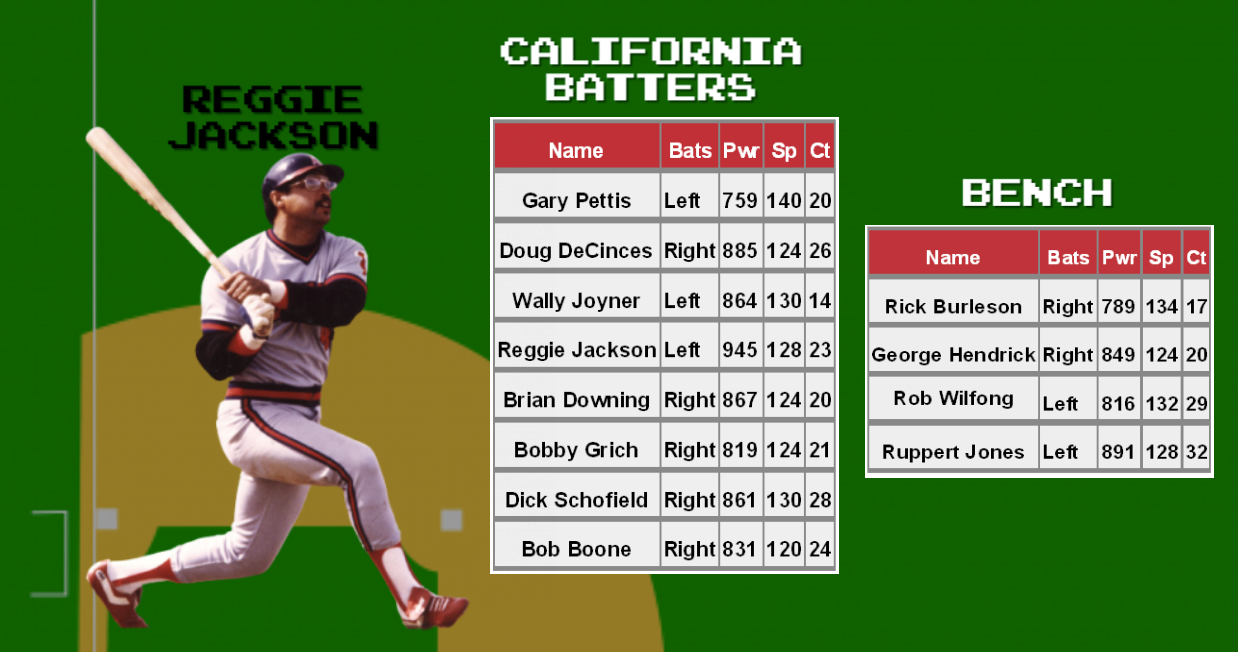 Gary Pettis is a controversial player.  He’s got a weak bat, but is a lefty with good speed.  This often gets him an at-bat or 2.  The heart of the order is fairly solid with DeCinces, Joyner, Jackson, & Downing.  Only Jackson possesses elite power, but it’s a formidable run of good bats.  From there the sub situations take center stage.

Ruppert Jones needs to get in the line-up!  He’s a solid sub for Pettis or Grich.  If you must have a lefty dominated line-up in the middle, he can replace Downing, but the power increase is minimal.  Hendrick is a great fit in the 8 spot for Boone.  This leaves Wilfong on the bench who can be utilized a couple ways.  Either at lead-off, or for his lefty bat in the bottom of the order depending on how you’ve previously subbed.  Wilfong is a slight power downgrade from Boone, but a switch some will make for the lefty bat.

Burleson offers some late game pop with the pinch hit bonus, but doesn't really upgrade over anyone other than Boone, Wilfong, & the pitcher.

Overview:  California with subs and the righty/lefty mix is a real solid line-up.  It lacks elite power, but has no weak areas for a pitcher to exploit. 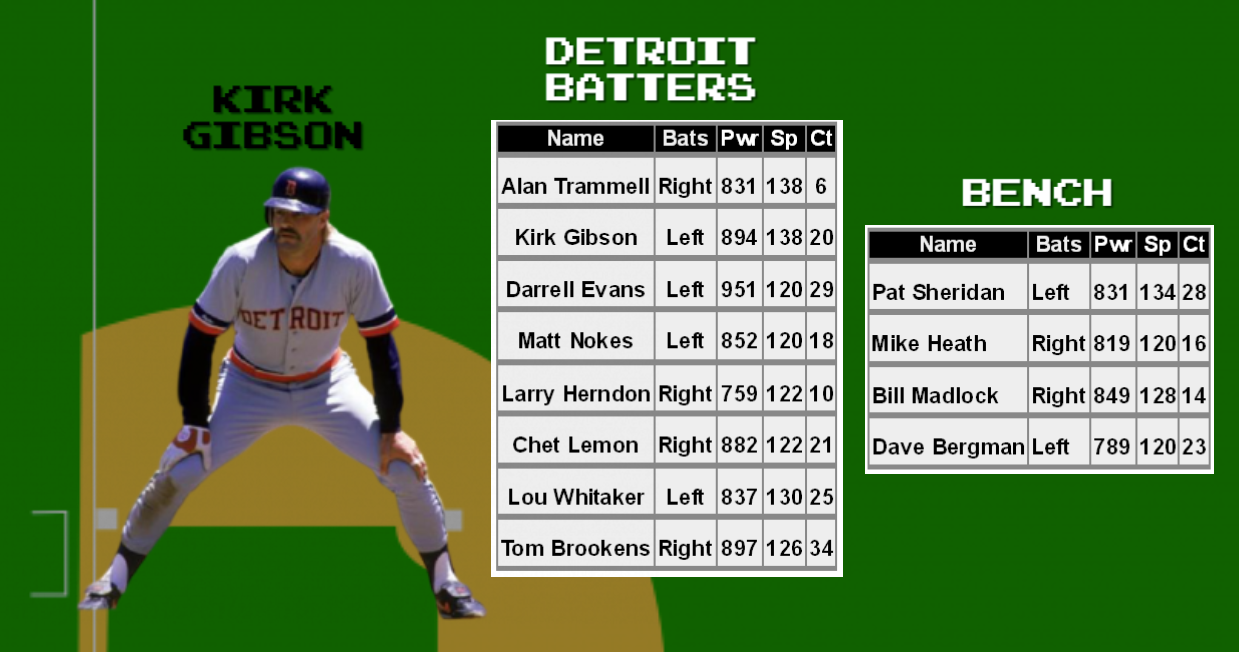 After that Detroit has a consistent amount of power, but doesn't quite rival Boston or National League.  Chet Lemon & Tom Brookens are dangerous, and there really isn't a weak link in the order.  Subbing in Madlock for Herndon in the 5 spot is necessary.

A strength for Detroit is how the bench can be utilized with late inning subs.  With the 64 point pinch hit power bonus, the 3 remaining bench players become very powerful in late game situations.  Pat Sheridan is an upgrade in power over 5 batters in the line-up.  Heath can sub in for 4 hitters and Bergman for 2.  This gives Detroit solid options late in the game if a homerun is needed.

Overview:  Detroit isn't the absolute best line-up but ranks high, is very powerful & will provide plenty of fireworks in most games. 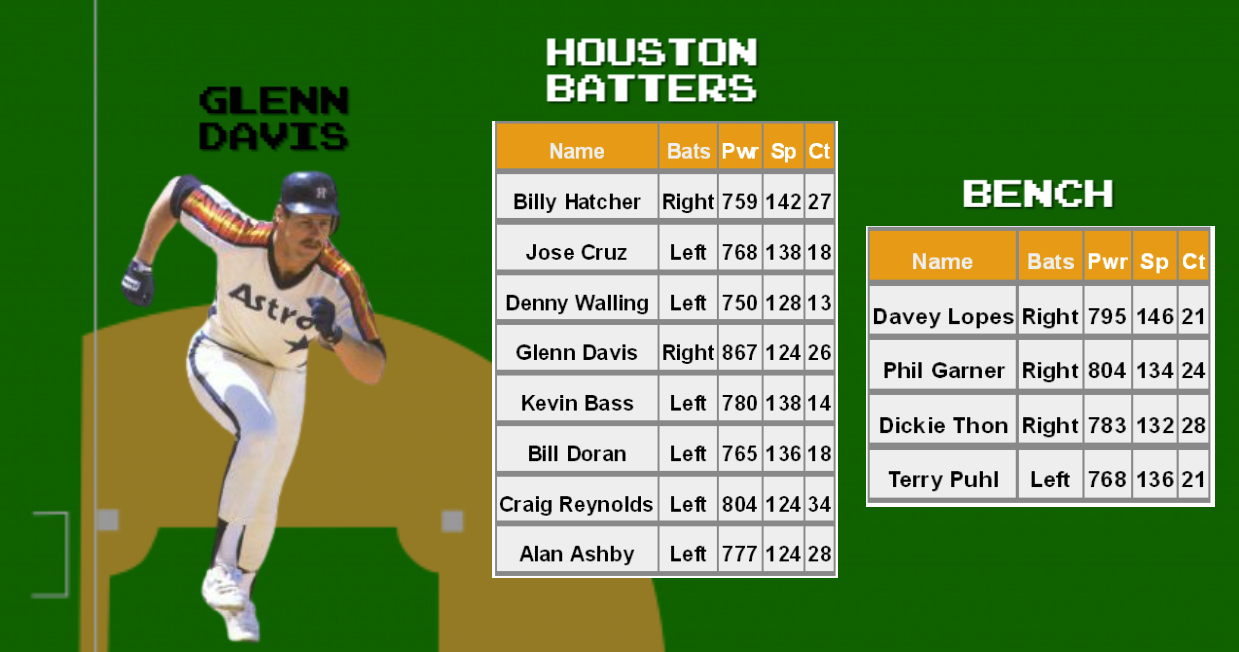 Houston has the most power deficient line-up in the game, but has speed nearly on par with the Cardinals.  Billy Hatcher & Jose Cruz are mainstays, &  its imperative to sub in Davey Lopes 3rd.  You need to try and string a couple hits together to score a run with that speed.  Glenn Davis is basically a non-factor as a clean up hitter.  Bass in the 5th spot is a lefty bat with some decent speed.

Phil Garner is a good option to sub for Doran.  He's got a little speed & more power.  Reynolds stays in & Ashby is typically subbed for Terry Puhl.  When it comes to late subs, Dickie Thon with the pinch hit power bonus upgrades for everyone but Davis.

Overview:  There's no power here.  Wear the opponents pitcher down and try to take some chances on the base paths. 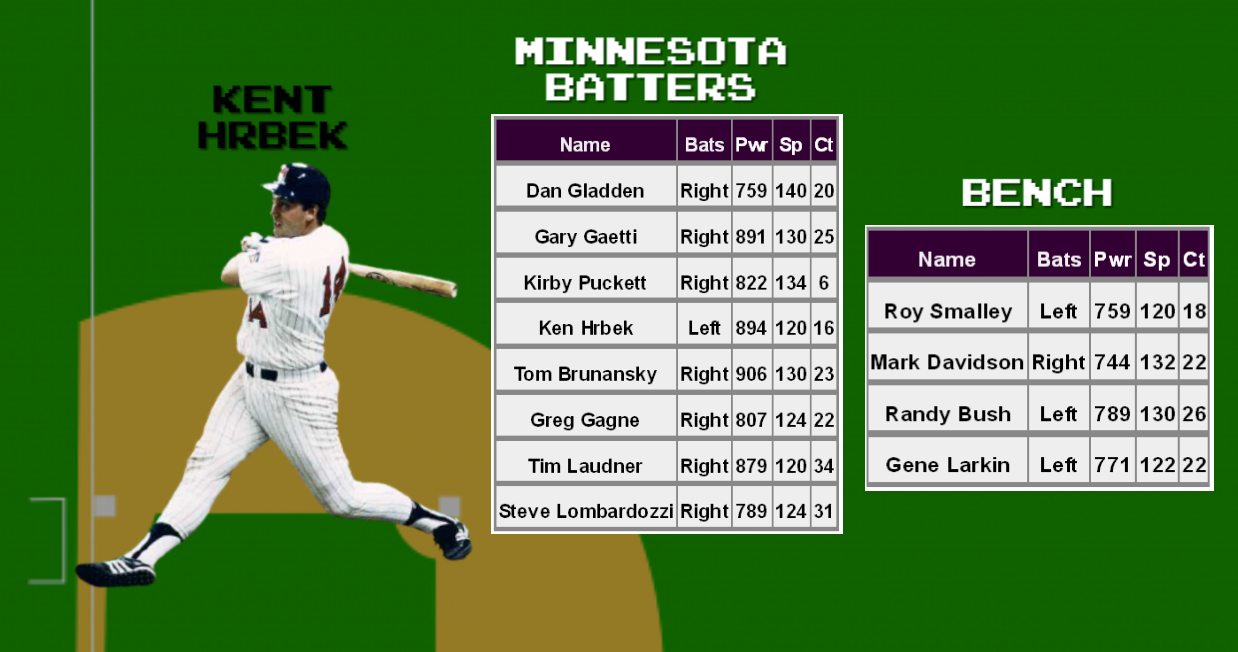 The Twins have an undervalued line-up.  Dan Gladden has good speed at leadoff.  Gary Gaetti has serious power & the duo of Kent Hrbek & Tom Brunansky gives Minnesota a nice set of bats in heart of the order.

Tim Laudner batting 7th is a slugger.  The power of Minnesota isn't elite, but spread out nicely from top to bottom.  Walking Laudner to get to Lombardozzi is typically not a bad idea.  The Twins bench is very unspectacular, but Randy Bush is a decent bat with the pinch hit power bonus.

Overview:  There's some power here, & a few late substitutions make this a very solid line-up.  This line-up doesn't have a super slugger like Boston, Detroit for example but the power is there to hit some home runs. 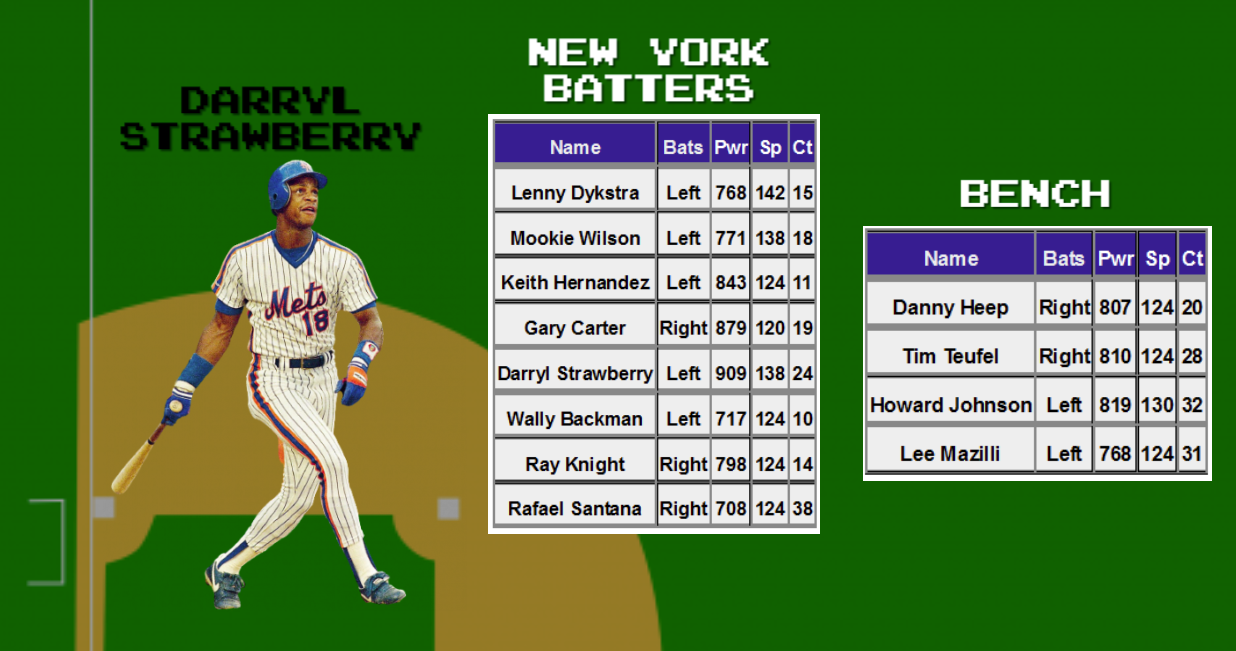 New York's line-up severely lacks power and needs production via speed at the top of the order.  Lenny Dykstra and Mookie Wilson need to reach base & manufacture runs.  You can’t rely on the long ball with the Mets.

Keith Hernandez and Gary Carter offer decent pop, but don't pose a threat like Darryl Strawberry.  One glaring issue for NY is Strawberry batting 5th.  That hurts his chances to see the plate with Dykstra or Wilson on base and he has no protection behind him.

Wally Backman bats 6th and gets pulled in favor of Howard Johnson for an upgrade.  Johnson however doesn't amount to suitable protection for Strawberry though.  Santana needs to be replaced by either Heep or Teufel.  Knight could be replaced for a nominal power gain, but saving a batter for a late pinch hit situation is in your best interest.  Lee Mazilli rounds out the bench.  He brings a lefty bat, and with the pinch hit power bonus can effectively sub in for every player not named Hernandez, Carter, or Strawberry.

Overview:  On rare occasions the Mets can hit some homers and racking up runs.  Unfortunately most of the time you’ll need to string together a couple hits or manufacture a run by bunting a runner over. 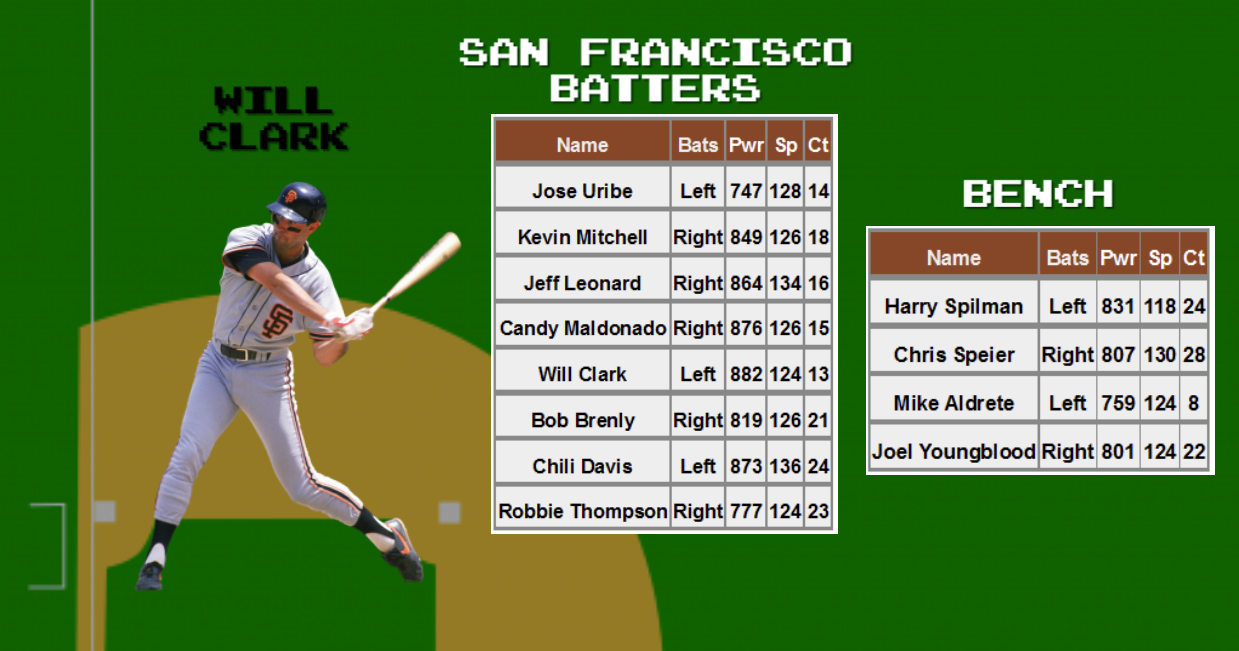 The Giants have an element of consistency throughout the line-up with above average power from top to bottom.  The Giants lack a mega-dangerous hitter though.  Kevin Mitchell, Jeffery Leonard, & Candy Maldonado provide some spark in the order batting 2nd, 3rd, & 4th.

Lefties Will Clark batting 5th & Chili Davis hitting 7th are two of the best hitters in terms of their spots in the order.  The weak hitting Bob Brenly sitting between them offsets the threat, as he gives the pitcher a chance to coast between the two.

Overview: The Giants have the ability to score a decent amount of runs but can lack consistency, requiring a good effort from the pitchers. 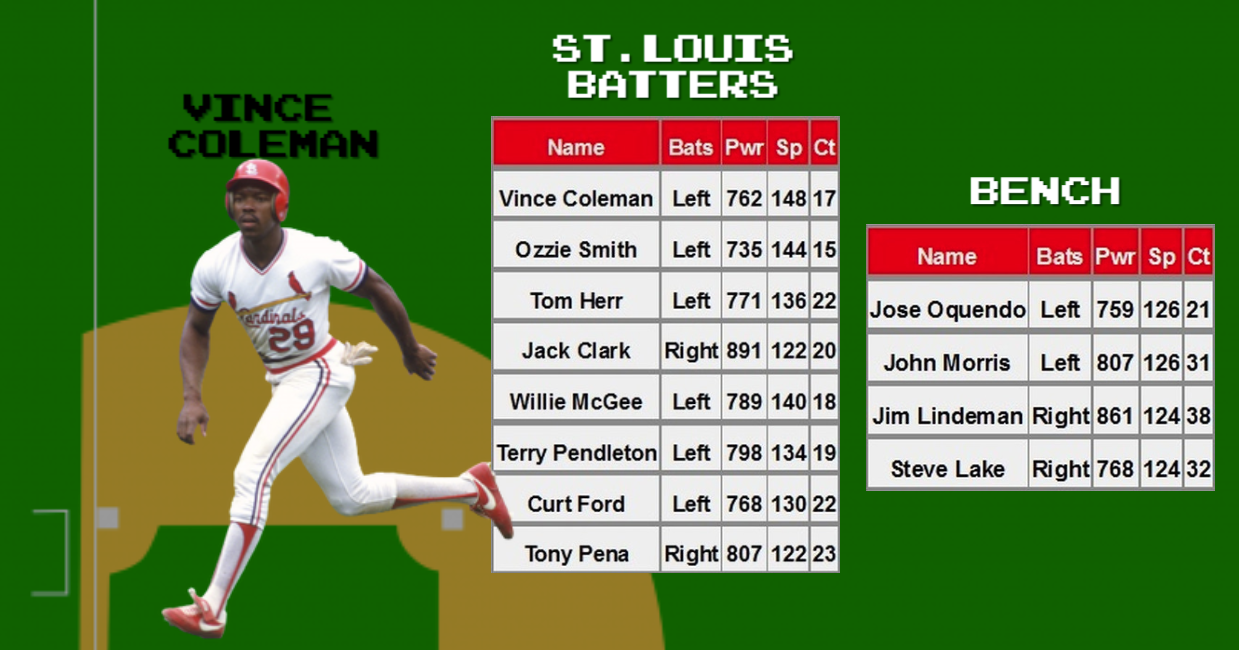 Much like Houston, the Cardinals have very little on the power side.  Vince Coleman, and Ozzie Smith need to get on for this offense to produce.  Tommy Herr needs to get subbed for Jim Lindeman.  Lindeman provides some power and forces the opponent to pitch to him with Jack Clark up next.

A smart player will walk Jack Clark EVERY time he comes to the plate!  EVERY time, unless it will walk in the winning run.  Willie McGee follows up with good speed, but non existent power.  Curt Ford needs to be subbed out for John Morris who gives you more power, a lefty bat, & nearly the same speed.

When it comes to late game subs, its pretty much a free for all.  Steve Lake & Jose Oquendo with the pinch hit power bonus will increase power for everyone but Clark & Lindeman.

Overview:  Try to take the extra base with the speed, & look to bunt runners over.  Expect Jack Clark to get walked a lot. 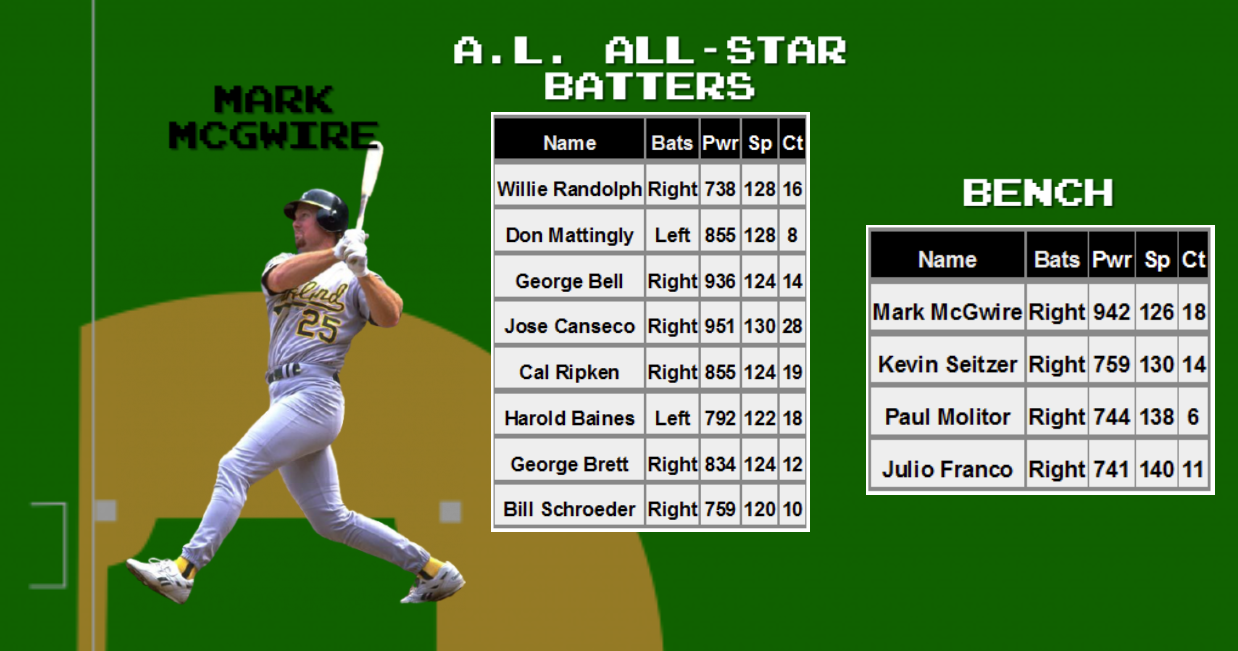 Substituting Mark McGwire for Randolph into the lead-off spot gives American League the most fearsome 1-4 in the game.  Mattingly is a solid lefty, & the Bell/Canseco combo has elite power.  Ripken at 5 has decent power.  Unfortunately the bottom of the order leaves a lot to be desired.  Baines is a weak hitter, Brett is a mainstay at 7th, and Schroeder needs to be subbed-out.

After McGwire the bench is unspectacular, but offer good speed with Molitor & Franco.  There's a couple different ways to utilize the bench.  If you like lefty bats, Baines plays the duration until a pinch hit power bonus sub is necessary late.  Another option is to sub out the 8 spot 3 times through to the game to get maximum power from that position.  Ideally you can save Franco for a late situation to utilize his PH bonus power and good speed in 7th or 8th spot.

Overview:  The A.L. is strong at the top, but the weak 6-9 hitters allow the pitcher to coast through the bottom half of the order.  On the flip side, when the bottom half is hitting well this line-up is very difficult to deal with. 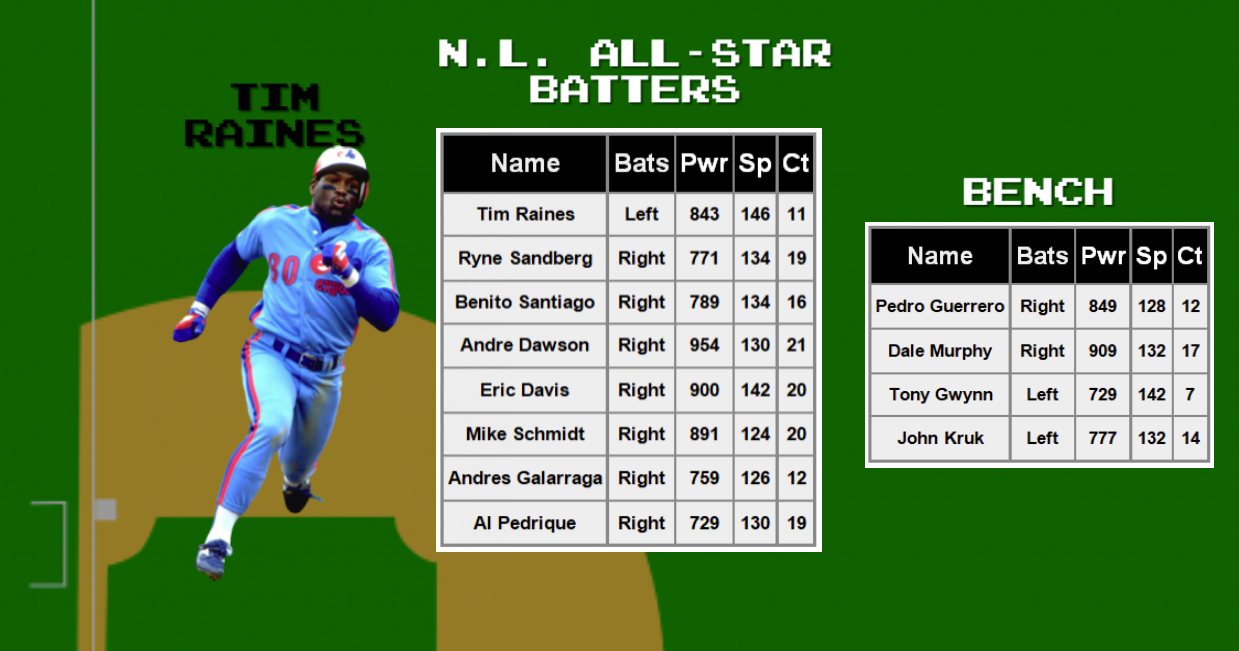 Much like Boston, this line-up strikes fear for opposing pitchers.  With the correct substitutions, the line-up is packed with power.    Tim Raines is the best lead-off hitter in R.B.I. Baseball.  Lefty Tim Raines has enough power to go yard on occasion, and is nearly as fast as Vince Coleman!  Subbing in the big bats of Dale Murphy and Pedro Guerrero at the top for Ryne Sandberg and Benito Santiago really pumps up the power.

Andre Dawson, Eric Davis, and Mike Schmidt provide a trio of bombers. Davis is also the fastest power hitter in RBI with lead-off hitter type speed.  The 7 and 8 hitters don't have anything to offer with Andres Galarraga and Al Pedrique. Tony Gwynn's speed makes him a decent option in the 8th spot, and John Kruk in a pinch hitting role late has a little pop.

Overview: This line-up is very difficult for a pitcher to navigate through. The pitcher does gets a little reprieve with the bottom the order.  Mike Schmidt in the 6th spot gives the N.L. legit power pretty far down the line-up.