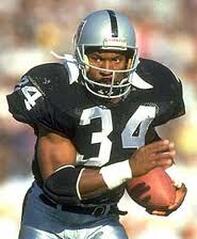 In the history of sports video games, no player is more synonymous with greatness than Tecmo Bowl's Bo Jackson.

Bo Jackson is the fastest offensive player in Tecmo Bowl, & one of the most powerful as well.  His role with the Raiders in Tecmo Bowl is quite simple.  Obliterate the defense!  His feats on the video game grid-iron are legendary.

Not to take anything away from his professional career as a 2 sport athlete in Football & Baseball, but I have surmised for years that part of the lore surrounding Bo Jackson was fueled by his ability in Tecmo Bowl. 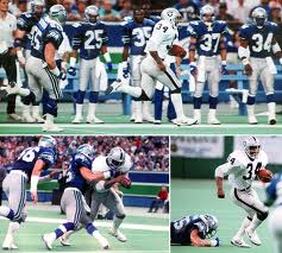 Bo torching the Seahawk defense
​Bo Jackson was an amazing 2 sport talent, however he's best remembered for a Monday night performance against the Seattle Seahawks in which  Bo posted 221 yards on 18 carries.

That game included a 91 yard touchdown run, & another run of 41 yards, along with running over Brian Bozworth at the goal line for another score.  Bo even hauled in a 14 yard touchdown pass.

That nationally televised game was the platform that exposed Bo Jackson & his remarkable talents to the nation.  From there, the legend grew to what it is today.
Bo Jackson has never played Tecmo Bowl!
When asked by an ESPN SportsCenter anchor about his ability in Tecmo Bowl, Bo had this to say about it ...

“To be honest with you, I’ve seen a kid play that game once.  I have never played that game. I still have the ‘Tecmo Bowl’ cassette, in a box somewhere in one of my storage places or in the attic.  But I’ve never played the game.”