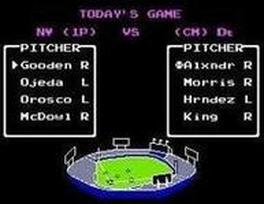 SF = fast ball (press down on control pad)
SR = regular speed pitch (A button & left/right on control pad)
SS = change-up/knuckle ball (press up on the control pad)
***Juan Berenguer has the highest fastball rating (216), and tops out with a 104 MPH pitch.
***Bob Ojeda has the lowest change-up rating(133).  He throws his knuckle ball in the upper 50's to lower 60's
CL =curve into a left handed hitter
CR =curve into a right handed hitter
DR =drop ball/knuckle ball rating (Higher the #, the better odds the pitch drops)
EN =endurance (Amount of pitches thrown before tiring)

Boston Red Sox: Doing enough to get by 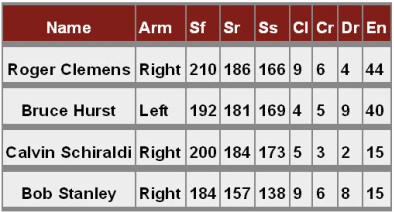 With Boston's powerful bats, you just need decent pitching to win.  Roger Clemens is the game 1 starter, and the only dominant pitcher on the staff.  Hurst is a pretty lack-luster starter, but being a lefty with a solid knuckle ball makes him useful.

Bob Stanley isn't a bad option to start the game.  He has same movement as Clemens, just not the heat.  Once he tires & the opponent is used to seeing 60-70 mph pitches, you can run Clemens in & throw heat.  Schiraldi  is typically the last pitcher to run out there & you only want to rely on him for an inning.

Detroit Tigers:  Doyle does the job 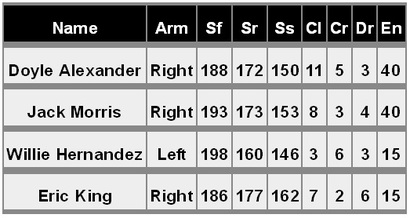 Success hinges on Alexander having a good game.  His ability overshadows Morris, and easily makes him the game 1 starter.   Go to Hernandez in the pen once the starter gets pulled.

Hernandez is a solid lefty with a popping fastball.  Hernandez doesn't throw hard with regular pitches, but his fastball abruptly changes speed and catches batters off guard.  King isn't anything special and a guy you only want to use when absolutely needed. 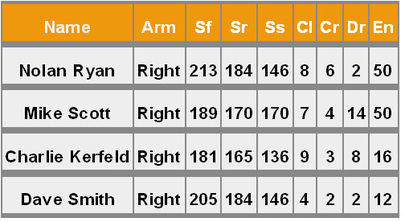 Since its righties across the board, the standard issued rotation by me is to start Kerfeld.  He's solid against lefties, and can mow thru 3 innings on a good day in a starters role.  Switching gears from there, Ryan then creates a massive change of pace as he throws a lot of heat.

Scott isnt a bad pitcher, but his knuckle ball rating is too high, and he doesn't have a lot of curve.  I  feel he's not a strong game 1 pitcher.  Problem being that your opponent can pretty much "take" any knuckle ball with 2 strikes and not worry a lot because most all of those pitches end up in the dirt and are called a ball.

Smith in late inning role doesn't provide much other than a fastball. 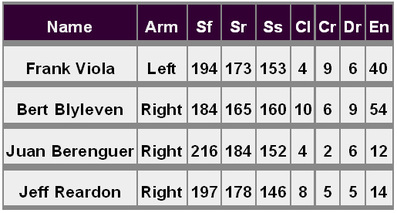 Viola and Blyleven form a pretty nice righty - lefty combo for the Twins.  Frank has pretty decent movement, and Bert has the highest stamina rating of all pitchers.

Reardon as far as right handed relievers go, is fairly solid as well.  Berenguer doesn't have much other than a blazing heater, but can be good for an inning to blow away the batters with his fastball.

Interestingly enough, it all starts with Orosco for me.  The side arm reliever mows down righties like mad.  Many people have expressed difficulty in hitting off side arm pitcher because of the extra movement the ball seems to have.  Run Orosco out there to start the game and typically you can get 3 innings out of him.

Bucking more trends when I go to the pen, Ojeda is usually my guy in the opener of a 3 game series.  Partially because I prefer lefty pitchers, and furthermore because the guy has wicked stuff.  His good drop ball rating is key in getting some strikeouts, and he's got the ability to throw a pitch that tails away from righties off the plate.  It looks very hittable when it leaves the mound.

McDowell is actually a decent pitcher to use to close out a game.  Half-way decent movement, decent fast ball, and solid knuckle ball.

Gooden is typically my game 2 guy.  His attributes are pretty solid, but Ive found that a lefty(Ojeda) who can give me 4-5 innings is too valuable to not use twice in a 3 game set.

San Fran is able to run a pretty stacked staff out to the mound.  Krukow and Reuschel offer the most duanting duo of starters imagaineable.  Wicked curve action and nasty knuckle balls from both.  niether throws that hard, but you make batters look stupid during the 4-5 innings they are on the hill.

Garrelts movement isn't good, but he can throw heat late.  The added bonus is a solid knuckle ball that'll hit the dirt more often than not.  Robinson is a pretty solid reliever.  He is easily the 1st call to the bull pen.

John Tudor is considered the best pitcher in RBI Baseball.  In terms of the hurlers with the best movement both ways, Tudor also has the best fastball of the bunch.  Tudor being a lefty makes him, even more valuable.  Beyond that, the Cardinals staff is decent.  Cox is alright for a 2nd starter.


Dayley & Worrell give you a slightly better than marginal bullpen with a lefty, & Worrell is a sidearm pitcher.

The A.L. is up there with the Mets having the best pitching staff.  Jimmy Key & Saberhagen form a nasty starting duo.
Righetti & Henke out of the pen have unique abilities.  Both can throw deceptively well outside & away from same handed hitters.  The overall combo of 2 right handed hurlers & 2 lefties makes AL able to attack virtually any batting lineup.

The National League is bolstered by 2 of the games best pitchers.  Fernando Valenzuela & Steve Bedrosian are as good as anyone at times.  Fernando however has such a huge curve, that at times its hard to control and consistently throw strikes.  A batter with a good eye can sometimes wear him out taking a lot of pitches.  Bedrosian brings a pretty nasty curve as a side arm pitcher.

Beyond those 2, Sutcliffe & Franco are fairly mediocre.  In the context of the overall team with the Fernando and Bedrock, along with the NL's big bats, these 2 don't need to be amazing to get the NL some wins.