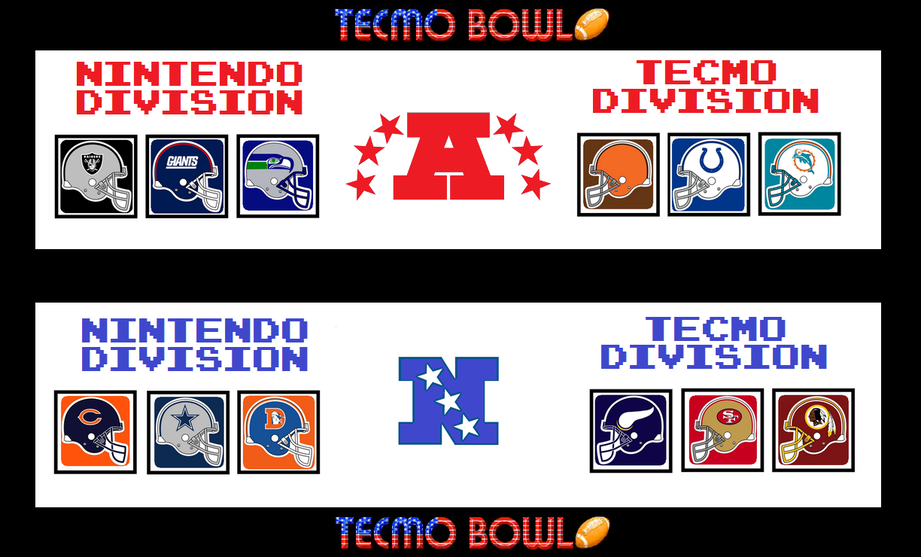 The 49ers and Bears share a division again, and have met in 2 straight conference title games.  The trend looked to continue.  The Giants had a rough end to season 3, and look to rebound.  Miami has won back to back conference titles and finds themselves in a very winnable division this season.

San Francisco proved to be the most dominant team we've witnessed during the regular season.  They set the points scored record & nearly set a new points allowed record.  Elsewhere in the AFC,  Denver had won division titles in seasons 2 & 3 yet was unable to win a playoff game.  Taking a 3rd consecutive division title was an impressive feat.  The Bears took a step back by going 7-5, but Minnesota emerged as a contender.

The Giants had a magnificent season as the defense posted 9 shutouts in 12 regular season games.  It was a long overdue return to glory for the Giants.  Both the 49ers & Giants appeared to be on a crash course with each other in Tecmo Bowl 4. 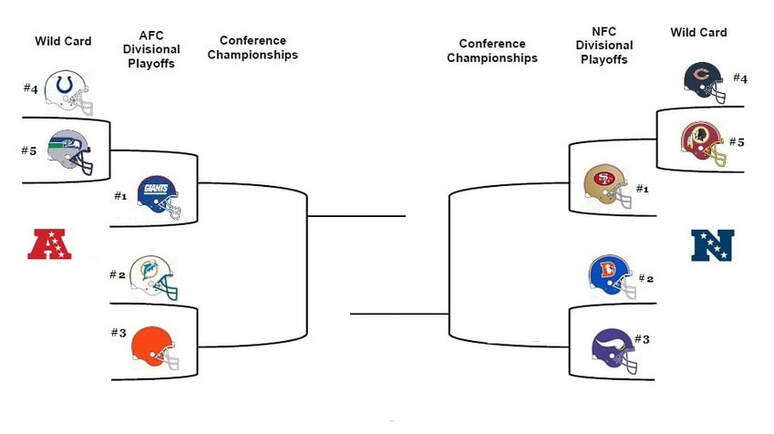 in the Wild Card round of the playoffs, Seattle won a game of field position, by keeping Indy in the shadow of their own edzone to knock off the Colts.  In Chicago, the Bears easily disposed of the Redskins & headed on to face the undefeated 49ers. This would mark the 3rd consecutive season the Bears & 49ers would meet in the playoffs.

The divisional round featured close games in the NFC.  Denver defeated Minnesota 6-3 behind a great defensive game-plan, & a crucial Viking turnover.  The 49ers finally were able to put the Bears away in the 4th qtr & won 9-0.  The Bears handed the Giants their only loss earlier this season, and were likely the only team capable of beating the 49ers in the NFC.

In the AFC side, both Miami & Cleveland played determined defense, but the Dolphins were able to win by  slim margin 7-3.  The difference in the game occurred in the 3rd qtr.  The Browns settled for a field goal instead of trying to convert a 4th & 1 inside the Miami 5 yard line.  Cleveland never got near the endzone again, and Miami was heading to their 3rd straight conference championship game.

The Giants easily defeated Seattle 17-7.  With the Giants leading 10-0, Seattle's James Jefferson returned a kickoff for a touchdown to make things temporarily interesting, but New York was too much on this day. 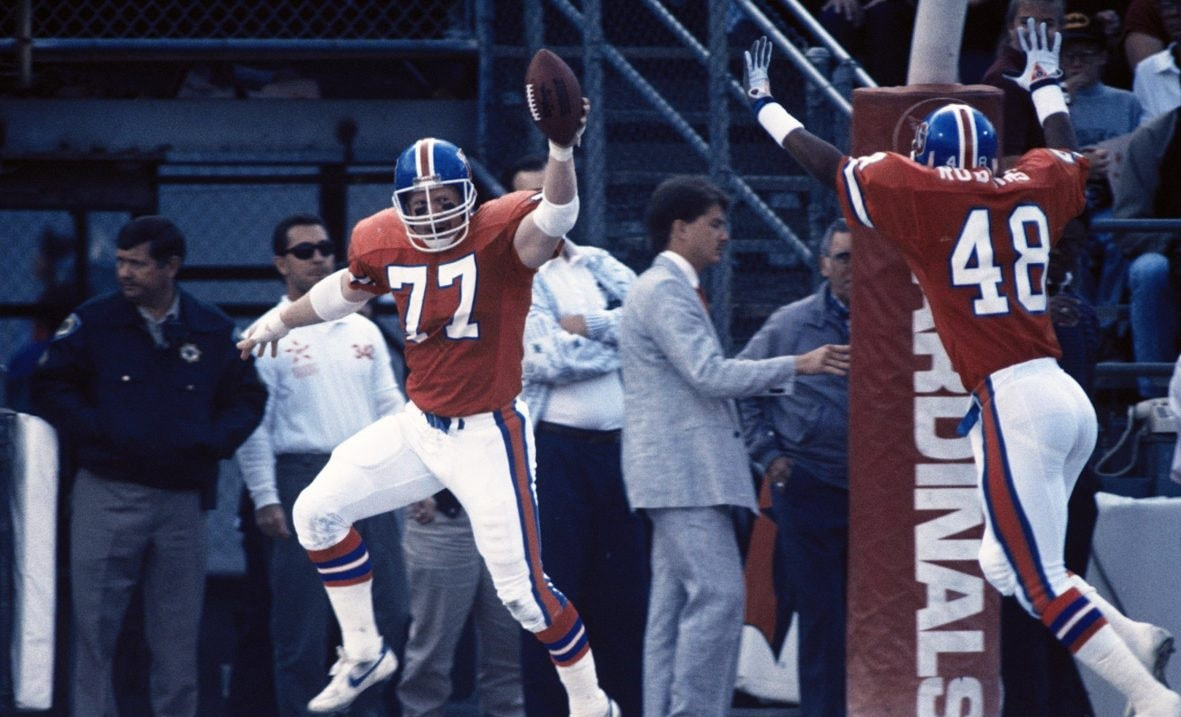 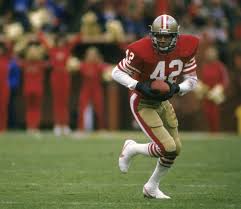 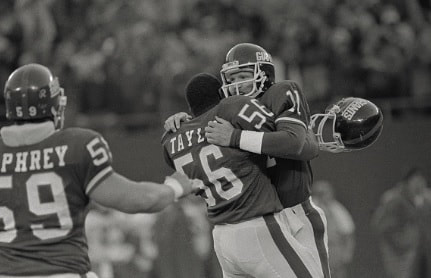 LT & Simms celebrated knowing they would play for a title. 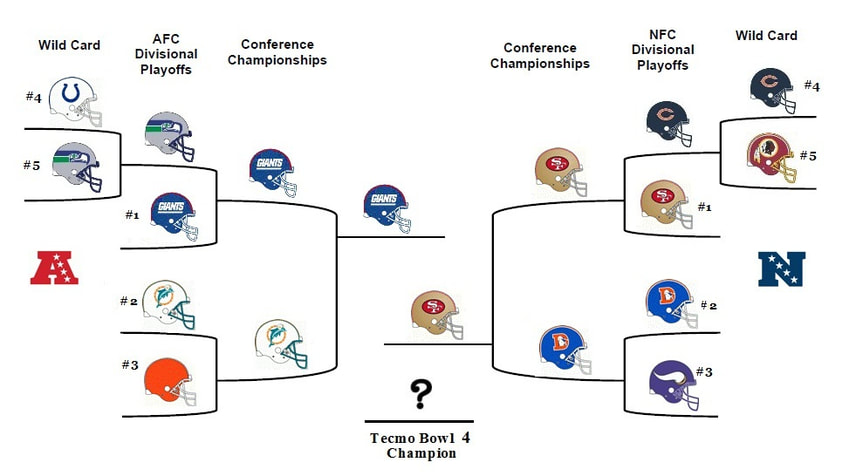 Early in the 4th quarter, the 49ers finally broke through with a touchdown and a 7-0 lead.  The Giants had struggle to even get 1st downs all game, and things looked bleak.  Dave Meggett on the biggest stage took the kickoff to the house, single handedly keeping New York alive.  The 49ers had what looked like enough time to possibly mount a drive at the end.   Joe Montana led the 49ers past mid-field but time was running out and Leonard Marshall picked off a pass with a few seconds remaining to ensure there would be no late score.  The game went to over-time tied at 7.

In O.T. the 49ers were again the aggressor in the yardage category, but unable to score drive after drive.  The Giants could not generate any 1st downs though.  The Giants Sean Landeta was the superior punter and he paid dividends all game.  His punts pinned the 49ers back all game.  While the 49ers held a huge advantage in yardage, and 1st downs, their average starting field position was much worse than the Giants.  A lot of their offensive output in the yardage category was just getting out of the shadow of their endzone.  It took 9 total iver time possessions between the two, but the 49ers finally got deep into Giants territory.  A Roger Craig touch down capped off a long drive for the win.  The 49ers won Tecmo Bowl IV by a score of 14-7 and were now two time Tecmo Bowl Champions in the midst of a 32 game win streak. 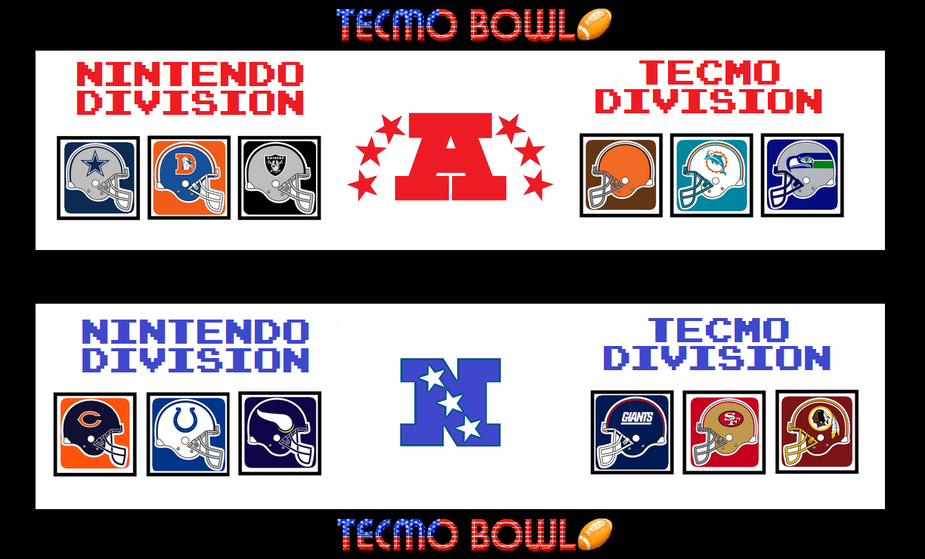 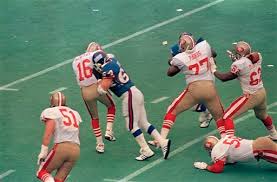 Instead of making a run at a 3-peat, the 49ers were surprisingly a punching bag. 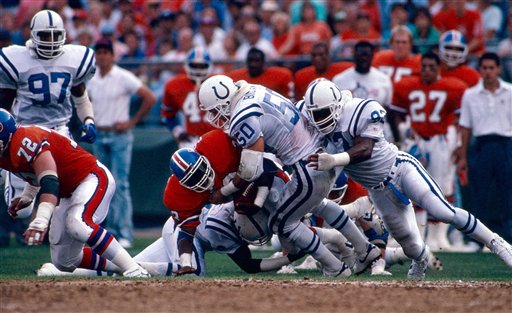 In a season where defenses ruled the league, Bickett & the Colts shut out 5 opponents 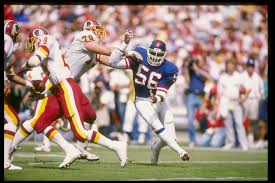 Lawrence Taylor & the Giants had 6 shut outs, including 2 against the Colts. 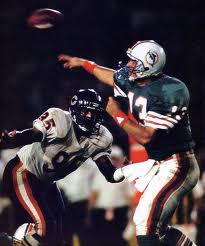 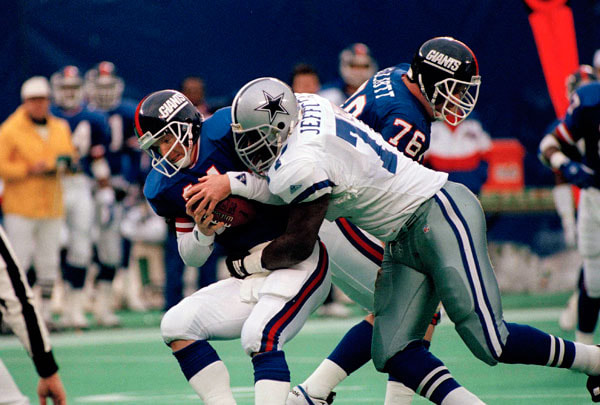 Dallas shocked the world opening the season with big wins against the Giants & 49ers. 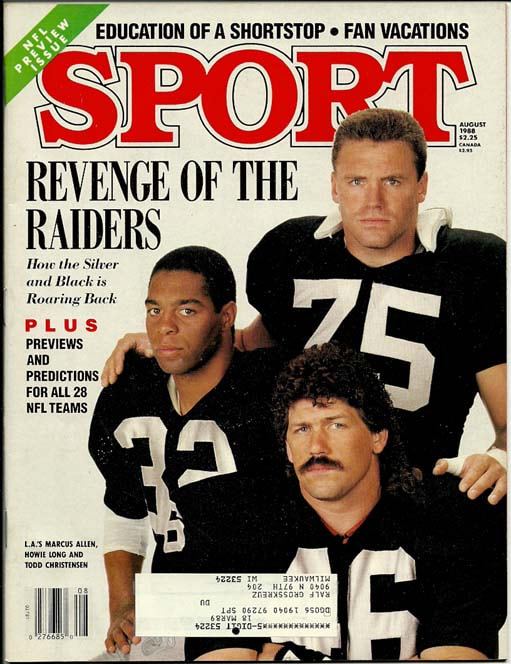 The Raiders were rolling all season on offense & defense. 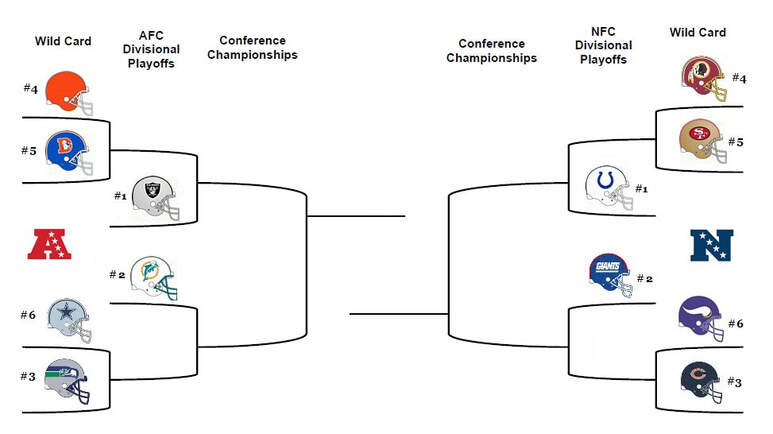 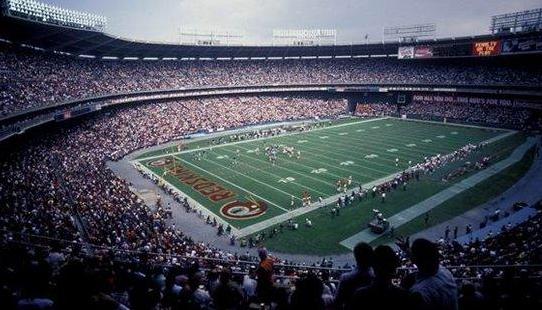 The 49ers seasons started in RFK stadium with a week 1 loss. Their season ended there in the wild card round. 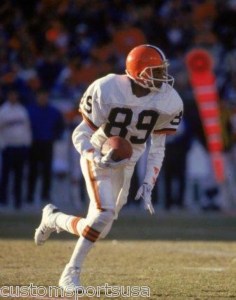 The Ice Cube cooled off the Broncos with his big kick returns.

A packed Soldier Field saw Chicago get by Minnesota and move on to the Giants. 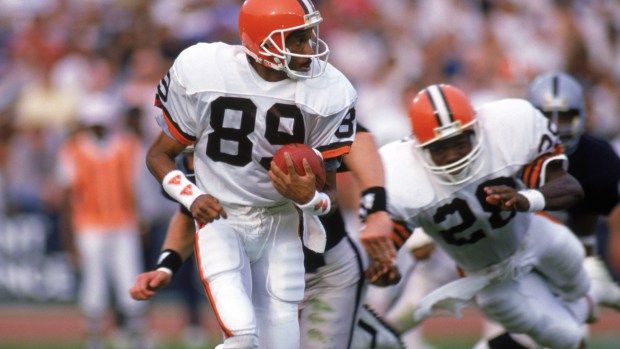 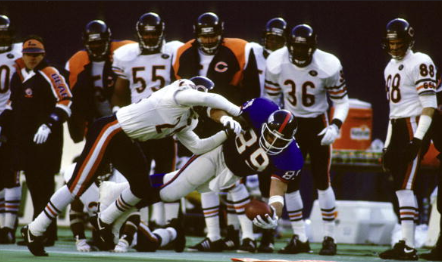 Yards were hard to come by in the Bears/Giants game and 3 field goals provided the difference. 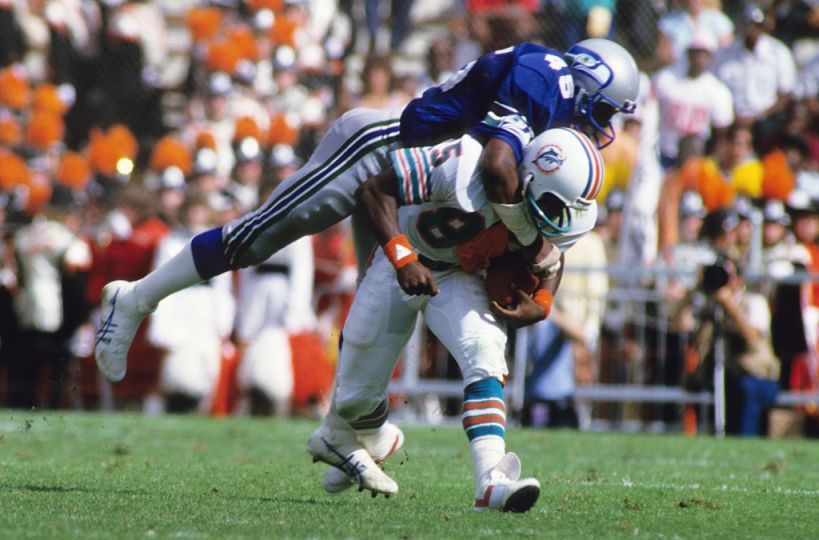 The Seahawks defense manhandled the Dolphins all day and punched their ticket to another conference championship game. 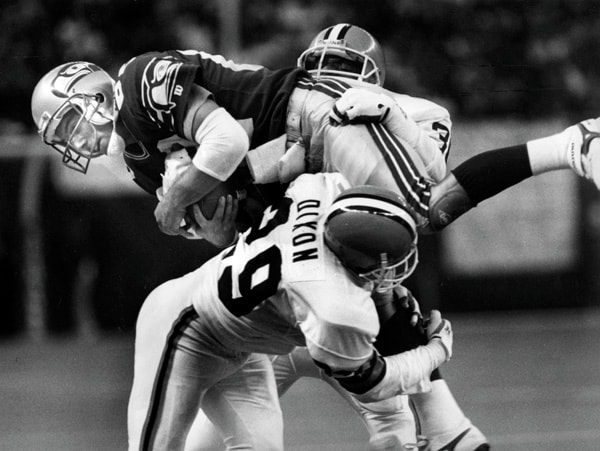 The Seahawks & Browns took part in a defensive battle. 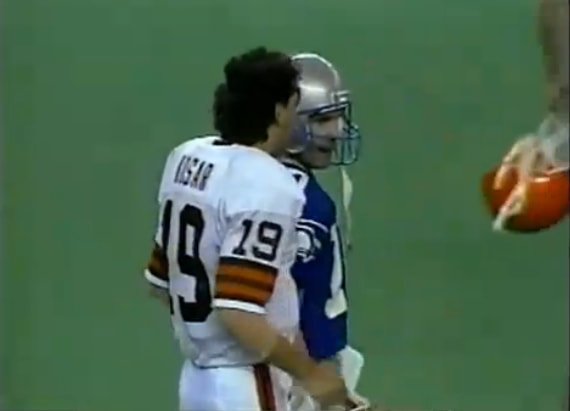 When it was over Krieg had beaten Kosar in another conference championship game. 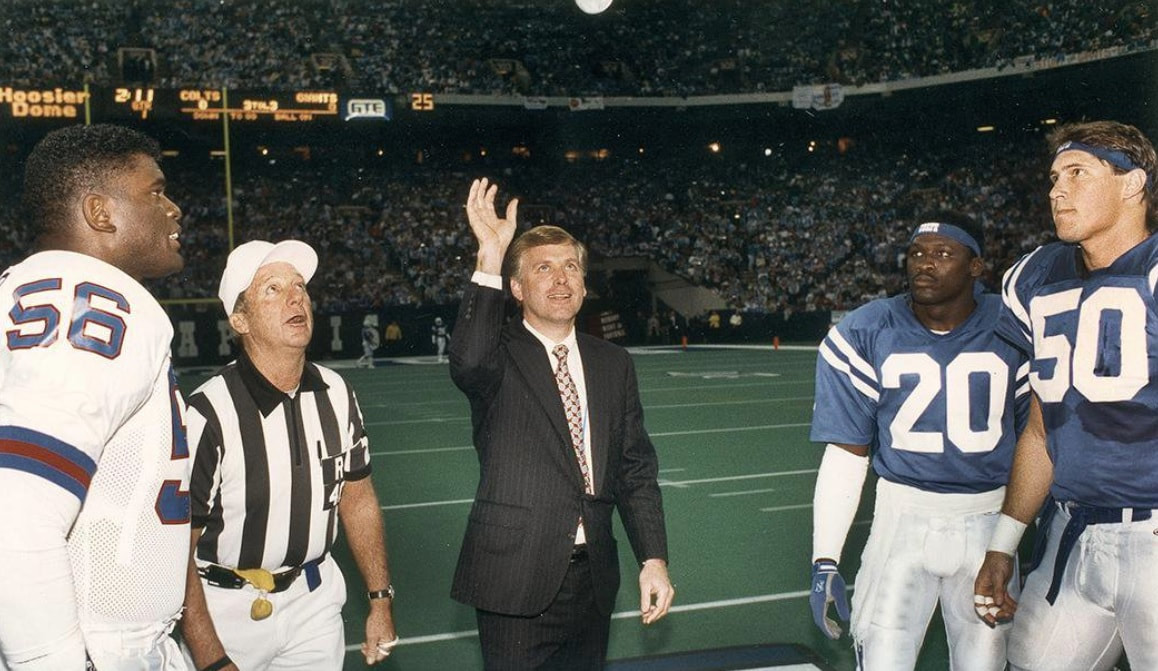 The Colts & Giants needed Overtime to determine the Conference Championship. 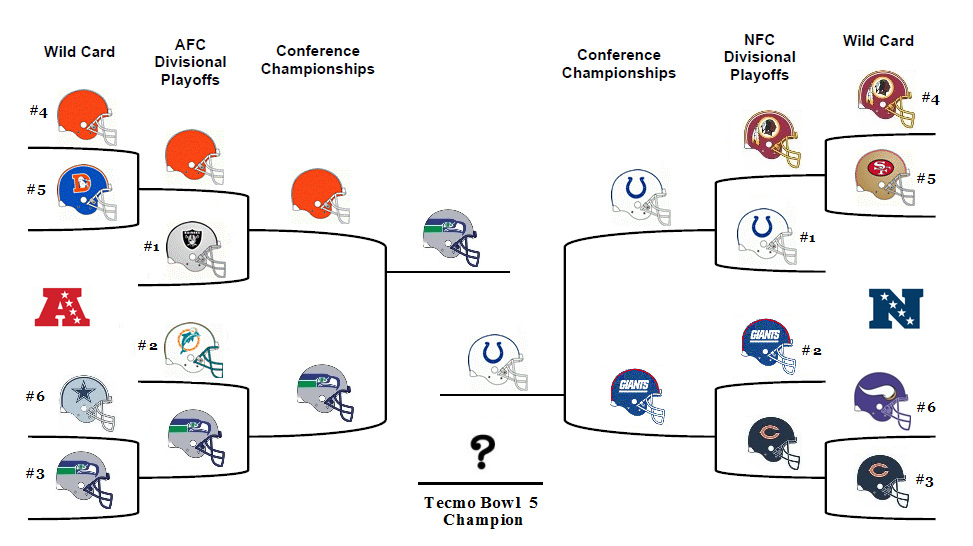 The Colts took the opening drive just past the 50, & Dean Biasucci lined up for a field goal, but Greg Gaines blocked the kick.  Dave Kreig & Curt Warner got Seattle inside the Colts 30.  Norm Johnson came on to attempt a field goal on 4th & short, but Duane Bickett blocked the kick to keep things scoreless.

The Seahawks drove into Colts territory again on their 2nd possession, but were stopped on 4th & short inside the 30.  2 drives inside the Colts 30, & no points.  Seahawks coach Chuck Knox was very frustrated as they had missed out on 2 opportunities for points.

Eric Dickerson broke off two long runs & the Colts took a 6-0 lead before halftime.  Fredd Young blocked the extra point.  In the 3rd quarter, Seattle was stopped on downs near mid-field which the Colts turner into 3 points & a 9-0 lead.  With Seattle in desperation mode in the 4th, the Colts managed to turn them over two more times.  Indy added a touchdown to Bill Brooks to finish off the scoring with a 15-0 victory.

The Colts had the best defense in the league, only allowing 44 points in 12 games.  In the playoffs they rattled off 3 consecutive shutouts en route to winning their 1st Tecmo Bowl. 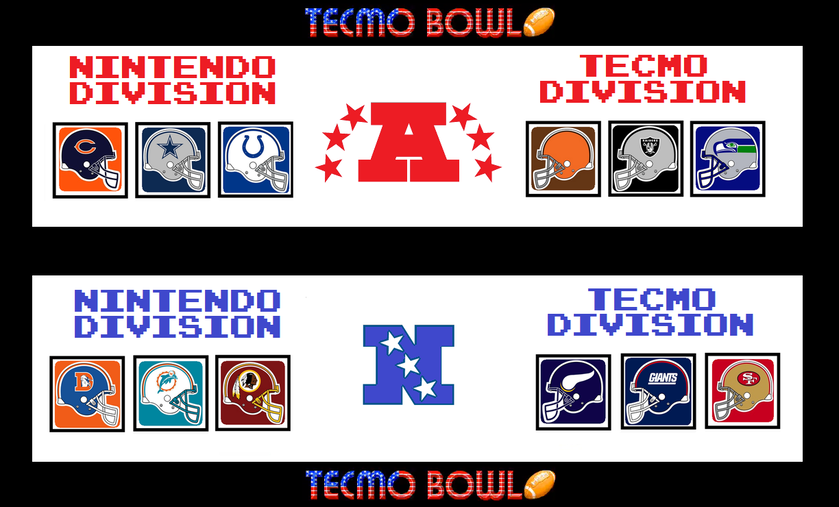 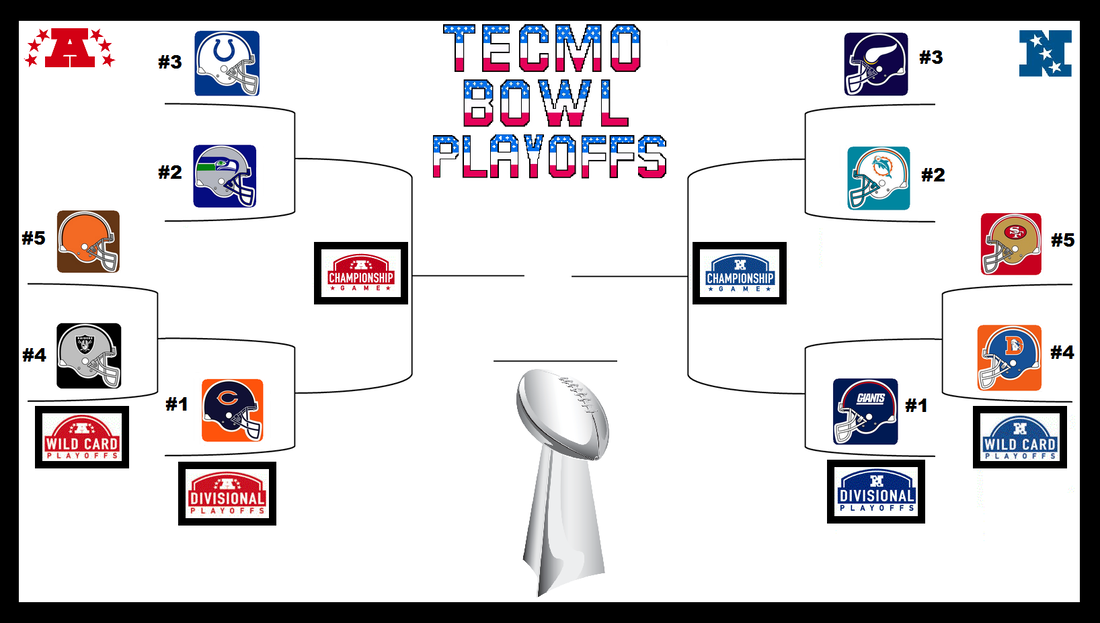