Coming into the season, the Raiders and Browns were expected to challenge for playoff berths.  Instead they combined to go 5-19, and faced an uphill battle to reach the playoffs.  Cleveland won handily in round 1 against Dallas by a score of 13-3, while LA struggled but pulled the game out late 10-3 over the Colts.

Advancing to the qualifying round, the Browns & Raiders pulled off upsets to get a 2nd chance at living up to pre-season expectations.  Cleveland's defense got control early over Washington with a 2nd qtr INT providing the spark, and they prevailed 10-3 over the Redskins.  Bo Jackson ran rampant en-route to an impressive 17-0 victory over the Seahawks...ending Seattle's bid at defending their championship.

The play in championship game saw LA take a commanding 20-7 lead in the 3rd qtr, and the win over Cleveland sent them into the playoffs with a good deal of momentum.

In the opening round trailing 10-0 at the half, Bernie Kosar led Cleveland on a touch down drive to make a game of it against the Giants.  Early in the 4th, Kosar throws an INT to Marshall in the endzone.  Kosar had a receiver open but a moment’s hesitation cost him the score, and possibly the win.  Backed up near the endzone Landeta comes out and punts on 1st down.  From there Cleveland rallies again to drive downfield, but is finally stopped on 4th and 2 at the NY 25.

In the NFC opening round, Seattle took a 7-0 lead on Minnesota behind the running of Warner to set the tempo.  Leading 14-7 in the 4th Kramer was picked off by Fredd Young and the Seahawks added a late score to win 21-7.

In the Play-In championship game, Dennis Gentry takes the opening kick off to the house.  Lavette takes a couple into Bears territory throughout the game, and Dallas finds itself with a 15-10 lead early in the 4th.  Gentry then returns his 2nd kickoff to for a TD on the day and the Bears lead 17-15.  Danny White comes out throwing for Dallas, and the Cowboys eat enough clock for Ruzek to kick the game winner as time expires to ensure Gentry is done for the day.  Dallas wins 18-17 in one of the greatest games of Tecmo Bowl ever played.  The game got real crazy in the 3rd quarter when 3 consecutive possessions in Dallas territory led to interceptions and culminated in a field goal by Kevin Butler. 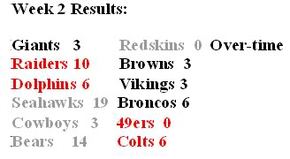 **Giants/Redskins game went an hour and 20 minutes! Skins defense was playing out of their minds, but LT and Carl banks would not let Washington win this game.
**Raiders controlled the game, and Bo Jackson had a long TD run.
**Dolphins get bailed out by Lorenzo Hampton with some big run plays late which led to the game winning field goal.
**Fredd Young picks off 5 Elway passes. Denver made run at Seattle in the 3rd, but too many turnovers did them in.
**Apparently the 49ers have decided 24 game win streaks are a thing of the past, and drop a 2nd straight game. Dallas defense plays out of their mind for the 2nd game in a row. Montana tosses 2 more INT's
**Bears/Colts have a great game early, but the Bears overpower Indy. Colts are stuffed on 4th and short just inside the 50 late in the 3rd putting the game out of reach.

**49ers 24 game win streak in season play comes to an end. Montana throws 3 picks, and Redskins hold on late.
**Elway's 3rd qtr INT in Broncos territory dooms Denver. Miami takes control.
**Bears destroy the Raiders. Luckily, Chicago was forced into kicking a lot of field goals, or this score gets real ugly
**Colts win ugly, which they do best
**Cowboys defense stymies Giants offense all game, and the offense finally moves the ball in O.T. against LT and his boys.
**Gerald McNeil takes a kickoff to the house in the 3rd to tie things up, then does it again in O.T. to beat the Seahawks.

The rapture didn't happen so there will be more Tecmo Bowl and R.B.I. Baseball played.  Lots going on around here lately.  Just had 15 minutes radio time on Friday with 97.7 The Zone in Huntsville Alabama.  Obviously talking about Tecmo Bowl on the air!

The Tecmo player ratings have been posted now.  Those are good to have when assessing defensive player abilities.  Look for week 6 of TecmoBowl to be played on Friday.  We are stoked to reach the mid-point of the season.  We also wrapped up the RBI Playoffs.  Hopefully I can get the world series between Detroit and American league recapped soon, because a champion was crowned last week.

Oh yeah.....help support the site and post a link to it on Facebook or Twitter sometime.  Hook a brother up!  Every little bit of traffic helps out.

Also in preparation for the radio show I properly articulated some real in-depth strategy that I will be posting on the site soon.  This stuff will take your defensive game to a new level and you will crush your opponents!
Later on folks! 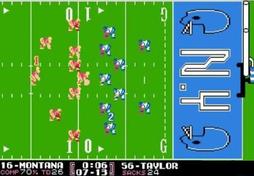 You will find the pages of this site feature in-depth information to illustrate and breakdown the various schemes and strategies you can employ in the game of Tecmo Bowl.

We'll rank teams offense, defense, and special teams play and even illustrate in great detail how to stop Bo Jackson and the Raiders.  The information provided here will set you on the path to mastery of this fine game.

Player attributes and abilities play a key role with the relationship of how they affect a teams offensive playbook, and what defensive scheme best suits them.  We'll dive into these factors and offer precise analysis to help you gain the most from the potential each team possesses.

However, there's more to Tecmo Bowl than simply the astute study of the game.  That’s where the tradition takes center stage.  Tecmo Bowl is a super game that ultimately shines in 2-player mode.  The strategic showdown heats up as you not only try to outperform an adversary, but to game plan for and out-scheme your opponent.

Our Tecmo Bowl experience is also rich in history overflowing with stories, legendary games, and detailed accounts of classic battles waged on the NES gridiron.  Among these pages you will find information on the greatest games played, along with tons of data about our league and its long-standing history.  Champions crowned, crushing defeats, improbable upsets, and amazing moments all will be chronicled here.
RBI Baseball Championship of the universe tournament
Online and Updated RBI
Dee-Nee: The home of all things RBI
Cam's amazing Tecmo Bowl site
Game #1 Cleveland(Brad) @ San Francisco(Nate)
This game officially kicked off the season 2 era.  The Browns defense forced a couple turnovers, but the 49ers still looked powerful by blowing out Cleveland 17-0.  The Browns had an opportunity to at least get on the board with a semi chip shot field goal attempt bit it was blocked by Charles Haley.  Cleveland also turned the ball over on downs in another possession in San Francisco territory.

Game #1 Cleveland(Brad) @ San Francisco(Nate)
This game officially kicked off the season 2 era.  The Browns defense forced a couple turnovers, but the 49ers still looked powerful by blowing out Cleveland 17-0.  The Browns had an opportunity to at least get on the board with a semi chip shot field goal attempt bit it was blocked by Charles Haley.  Cleveland also turned the ball over on downs in another possession in San Francisco territory